Approaching women is hard, no doubt, and it can be terrifying.  Unfortunately, you may be sabotaging yourself by WHAT you say when you first start speaking to a woman.  You can instantly improve your chances by learning the four words you should NEVER say!

I’m going to share a mistake with you here that A LOT of guys make when approaching women. In fact, it just happened to me the other day while I was out with a friend.

As you probably know, I’m more than happy for guys to come over and approach me (since this is what I preach)… But when they commit this mistake, it makes me cringe.

And the mistake I’m talking about is telling us right away that we should ignore you.

This is exactly what that guy communicated with the first 4 words he said to me:

“Sorry to bother you.”

In his mind he was probably being polite. But it comes across as, ‘Let me apologize in advance for wasting your time and annoying you.’

It’s the exact opposite of what confidence is… And it’s why we immediately get turned off when a man approaches us in this manner. Think about it… he’s literally saying that he’s about to bother me. Why would I want to keep talking with him after that?!

This is the kind of weak frame a beggar would have.

Except instead of begging for spare change, this guy was begging for my attention. And begging is the key word here, because if he felt like he DESERVED my attention, he wouldn’t feel the need to apologize for bothering me.

This is something a lot of guys overlook… And in all the years I’ve been coaching men, I’ve noticed it a ton. They’ll be so focused on what they’re going to say AFTER they get her attention, that they completely neglect what they’re actually saying to GET her attention.

It might not always be “sorry to bother you” in those exact words. But the sentiment is usually the same. Some other examples are:

Basically anything that communicates you feel like you’re beneath her… or that her time is more valuable than yours. That doesn’t mean you need to be rude when you approach her. You can still politely get her attention without it seeming like you’re grovelling.

For example, a simple “excuse me” to get her attention is a million times better than, “sorry to bother you.”

If she’s in the middle of something or seems busy, you can also acknowledge that in a confident and socially intelligent way, rather than an apologetic way.

The guy who approached us the other day could have said something like, “Excuse me, I can see that you’re enjoying your lunch, however I had to say…” and then go ahead with the reason he was approaching us.

It’s more that you’re AVOIDING saying something that’s going to trigger landmines that blow up your chances before you’ve even begun. So that’s something for you to think about from now on… How exactly are you getting a woman’s attention when you approach her… and what is it unconsciously communicating about you?

Because if this is something you’re guilty of, just changing this one tiny thing can make a HUGE difference in how women respond to you.

However, this is only one of the mistakes that guys make when approaching women.

Mistakes that practically kill your chances with her right from the get go. And most guys are completely unaware they’re even making these mistakes, which means they never correct them and start seeing the success they deserve.

So that you’re not doing anything to trigger her “no” response that 90% of guys face when approaching.

And of course, it goes into deep detail on what to do and say to move the conversation forward…

In a way that creates attraction, intrigue and the desire to see you again. 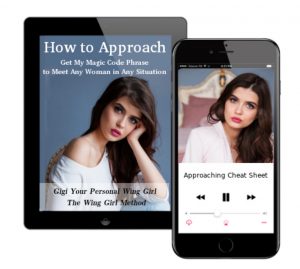 So if you want to have these kind of fun and positive experiences when approaching women, click here to check out The Approach Blueprint.