Know the difference between signs she likes you vs. she's disinterested

5 signs she likes you: It’s no secret that beautiful women intimidate a lot of men.

Sometimes this will be the case, but typically guys won’t recognize it.

So here are 5 signs she likes you to look out for that the woman you’re interested in could be feeling intimidated by you:

And not being able to hold eye contact because we feel intimidated by you.

If we’re not interested, we’ll usually look around at other things to signal that you’re not holding our attention. Whether that be looking at other people, our phone, or anything else in the environment.

But when we feel intimidated, we’re more likely to break eye contact by looking down but not focusing our attention on anything else. This is one of the signs she likes you.

Signs she likes you #2: Disqualifies herself

If a woman starts giving you reasons as to why you probably wouldn’t be interested in her, it’s a sure sign she’s feeling intimidated.

She feels like she doesn’t have as much to offer as you do, and that you’re out of her league.

Perhaps she’ll say something like, “You could get any girl you wanted, why are you talking to me?”

Or “I’m just an average woman, there’s nothing really special about me.”

In these kinds of cases, it’s because she believes she doesn’t measure up to the quality of women you’re accustomed to. 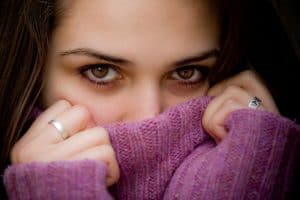 Signs she likes you #3: Gets quiet around you

I’m sure you’ve experienced being tongue-tied around women and not knowing what to say.

We might feel intimidated if you’ve got lots of cool stories to share, and none of ours seem interesting enough.

Or it could be that you’re extremely quick-witted and talkative, and we feel like we can’t keep up.

Either way, this is very different to when we’re quiet because we want you to go away.

The easiest way to tell the difference is through body language and other nonverbal signs. For example, if she’s smiling and paying attention to you, this is a good sign, even if she’s not talking much.

However, if she looks bored, annoyed, and is focusing on other things, it’s likely she’s not saying anything because she’s not interested and doesn’t want to encourage you.

Signs she likes you #4: Nervous fidgeting

When we feel nervous around someone, one of the telltale signs is fidgeting.

This is because we don’t feel relaxed and in control, and that nervous energy needs to come out somehow.

You might notice this if you see her tapping her feet… biting her nails… twirling or playing with her hair… fidgeting with jewelry, accessories or body parts etc. 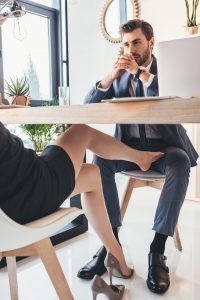 A common reason she may feel intimidated by you is if she thinks your value is much higher than hers.

You could have a lot going for you — whether it be your career, charisma, looks, accomplishments or anything else — and it makes her feel inferior.

To bridge that gap, she may feel the need to point out what makes her special. And this can very easily come off as bragging.

Remember, when people brag, it’s typically because they feel insecure.

Now, the best way to determine if a woman finds you intimidating is to look for a few of these 5 signs in unison.

And if you do notice this happening, how can you correct it?

You need to give her reassurance that you’re interested in her.

It might be a compliment on her appearance… or showing interest in her work or hobby… or appreciating her unique personality.

Whatever it is, the idea is you want her to feel like she’s good enough for you.

This is what you might call a quality problem. Because obviously, it’s better to be in this position rather than her feeling you’re intimidated by her.

It’s better for her to wonder if she meets your standards… instead of realizing that you don’t meet hers.

So how do you get into this position that women are so attracted to you?

That’s what you’ll discover in my program, How To Become A Man Women Want.

You’ll learn specific strategies for becoming the type of man that women don’t want to blow their chances with.

This means that you’ll have the upper hand in your interactions with women. If that sounds good, then click here to get all the details.

Yeah, well. I was in a similar situation and had 2 women sitting next to me watch the interaction, which was pretty much the above. “She is SO nervous around you. She keeps looking at u. Shes really taken with you!” 2 women confirmed it! I’m in! Nope: “What? No, just being friendly”. So if women (x2.in this case) cant get this right no way a guy can discern the difference…

Since no woman has ever acted this way toward me, even the woman I was married to for almost twenty years, this may be completely accurate.

A combination of 2 & 5 comes in the form of her saying things like “You’re not my type” or “You’re a nice guy” and things like that. It a way of her disqualifying herself while saving face to give the appearance that she’s not interested even though she is. It a way of “qualifying herself” because she feels she isn’t good enough and a way to project her own insecurities onto that man of interest.