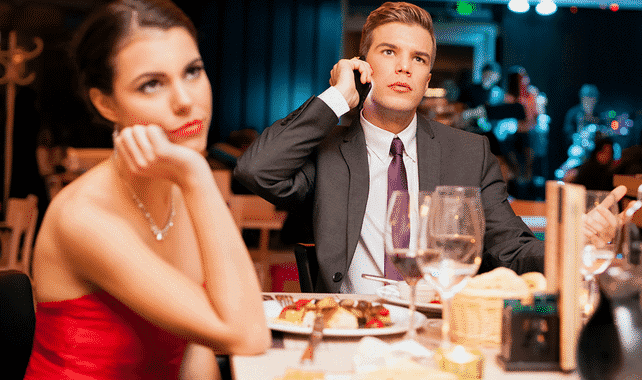 The other night, my girlfriend Sarah was over at my house, complaining about being single and telling me horrifying stories of just how awful her past few dates have been.

“Marni, it's honestly like men have forgotten how to be men. Either that or they just don't think I'm good enough to treat well.  I mean, I literally had a guy fart on our date. FART.  And he didn't care.  He thought it was funny.  A 36 year older who actually thought flatulence was an aphrodisiac.  He was shocked when I didn't want to make out him at the end of the night. Why is this happening to me????”

I've definitely had my share of bad dates with guys who I considered CLUELESS but I've never had someone pass gas on a first date.

I told her “you should write about this and I'll post it on my site so that guys can see the big mistakes other men are making on dates that are turning women off.”

She loved the idea and since she happens to be a wonderful writer for another site called Top Romp, it was very easy for her to quickly whip up an article.

So here is Sarah's article:

5 Ways Guys Can Ruin the First Date (And how to save it!)
By Sarah (Top Romp Writer)

This scenario is an all too familiar one for me: I’ve spent hours getting ready for a first date and even longer pouring over his profile, while simultaneously trying to predict whether or not this is going to be a match made in Tinder heaven or a total flop. We finally meet and drinks are consumed while our nerves start to soften. I begin to think this could be a great love connection and I might not die alone after all –and then it happens. He does something that totally turns me off and ruins the moment.

Guys, we need to have a little chat. I love you and I know you mean well, but we gotta talk about some major dating offenses you’re committing. I have a feeling most of you don’t even realize the damage you’re doing, or that you’re doing it at all. While every woman is unique and attracted to different things, there are certain actions that will ruin any date and turn almost any woman off.

If you’re a guy who’s looking for the one but is finding yourself unlucky in love, read on for 5 ways you may be ruining that first date.

5 Ways Guys Can Ruin the First Date (And how to save it!)

I’m gonna tell you a quick story, and if you’re eating or have a weak stomach, you may want to scroll down. Ready? OK. I went out with a guy once who in the middle of our first date farted right in front of me. Loudly. Unapologetically. A full bodied, Mexican dinner display of flatulence right outside the upscale gallery we’d just visited. He even looked a little proud of himself.

You’d think that not purposely farting right in front of your date would be an assumed basic rule of thumb, but apparently some men need a gentle reminder. Also, please remember your table manners; Don’t eat with your mouth open (Gross!) Do not belch, adjust your crotch, pick your nose or talk about bodily functions in general. If you wouldn’t do it in front of your grandmother, DON’T do it in front of your lovely date.

2. Don't Be a Cheapskate

I’m a proud feminist. It’s 2016. I’m all for equal rights. But I think a man should pay for dinner; At the very least the first one. If after that point the two of you hit it off, then you can come up with any financial arrangement that suits both of your needs. But for that very first date (especially if he initiates it) he really should pay. If your date puts up a fight and asks to split it, then be a gentleman and kindly refuse. That’s it. No splitting. No awkward glances while the bill lingers on the table.

A few years back, I went on a date with this cute hipster architect from Williamsburg. We went to a fabulous Tapas restaurant, and everything was going swimmingly until the bill came. He grabbed it, hooted and hollered over getting charged 2 extra dollars, and then suggested that we “join forces.” In one fell swoop, all of my fondness for him crumbled. I didn’t feel special anymore. I felt like a commodity. I’m not in the least bit cheap, and I can surely afford to pay for both of our dinners. But ask any woman and she will tell you the same; do the right thing and pay the damn check.

3. Bring out the Skeletons

I’ve been known at times to dredge up the past at the wrong time. We’ve all been guilty at one point or another of bringing up our past relationships way too soon. I’ve been on dates with men who within the first 30 minutes brought their skeletons out of the dating closet. Some even made totally disparaging remarks about their exes, which is a Major no-no. One special bloke told me before the drinks had arrived, “Just so you knooooow, If you ever break up with me — That’s it. You’re dead to me. You won’t even exist.” He then went on to bash the last girl he was with for cheating and lying. (I’d guessed that she was now dead to him too.) The thing is that these were all valid feelings. Being hurt by past lovers can affect all of us, but this was neither the time nor the place to express those feeling to me. I was turned off and saw him as a man with some serious baggage.

My advice in terms of bringing up your past is to wait. Wait just a little bit. You don’t have to play dumb. If she asks you when your last relationship was and how long was it, tell the truth. But then move on to the next topic. Save those those nitty gritty details for when the time is right and you’ve grown a bit closer.

This doesn’t just include saying stupid things like “Your place or mine?” or “That dress is so pretty but would look better on my bedroom floor.” (Ew) If this is just a casual hook-up situation, then go for it. But if you’re both looking for something real, then you’ve really got to harness some of that sexual energy and show a little self-control. I’m all for some friendly arm touching, flirtatious innuendo, and a good night kiss. But for a first date you really should not be venturing too far away from these. Don’t ask what her favorite positions are, how sexually experienced she is, or if she’s into threesomes. Not only is that wildly offensive, but it immediately makes her think you’re only in this for one thing. She’ll be asking for the check before you even get chance to order dessert.

I’ll never forget Josh from OkCupid. He seemed like such a gentleman in his messages, describing himself as “a nice Jewish boy every any mother would love.” Then in our first phone conversation he asked me to “describe my ass in three words.” Ummm, What? I thought it was a joke, but sadly it wasn’t. Immediately I was skeeved out. I felt sexualized and dirty. Where was the nice Jewish boy to bring home to mom? We shall never know, because our first date never happened.

I’m not saying that girls don’t like sports, swearing, and shots just as much as the boys do. But if you’re with a lady, then please treat her like one. Don’t drop the F-bomb profusely. You can swear for effect, but anything more than that may be offensive. And for the love of God DON’T get drunk and act like an animal. Remember this isn’t a night out with the boys. Don’t take her out to a loud and fratty sports bar and then watch the game over her shoulder. Instead, invite her to a romantic lounge or restaurant where the music is low and the mood is sexy. Remember that this could potentially be your future wife (if you play your cards right, of course.)

How to Turn Things Around

Okay, so you’ve committed one of my heinous dating offenses. She’s pissed and it looks like things are over. But wait! Not all is lost! There’s always a way to turn things around if you’ve made a misstep.

● Be honest. If you’ve said or done something offensive, nip it right in the bud. First, simply apologize. Tell her that you’re nervous, and that sometimes that causes you to put your foot in your mouth. Maybe you got a little fresh or found yourself looking at your phone instead of listening to her story. Just own it and move on. Nine times out of ten, she’ll appreciate your candor and forget about it just as fast.

● Flattery will get you everywhere. Women are highly verbal creatures, and we like to receive genuine compliments. Instead of complimenting her physique by grabbing her ass (btw please don’t,) a better option would be to say, “You look so beautiful and fit. You must work out all the time.” She’ll be delighted that you noticed all of her hard work and that you expressed it in a respectful and appropriate manner.

● Chivalry is not dead…or at least it doesn’t have to be. Even though it is 2016, women still like to be taken care of. We aren’t necessarily looking for our white knight to rescue us, but all it takes is opening the door, pulling out her chair, and maybe even a small bouquet of flowers to make us feel really special. A little goes such a long way.

● Relax. I’ve found that many men who ruin their dates with these ridiculous offenses do so because they’re simply nervous and not being themselves. Maybe they’re trying to act machismo or defensively putting walls up. Dating isn’t rocket science. Be sweet. Compliment. Use common sense, and treat her with respect. I promise if you follow these simple rules, you’ll get a second date. And hopefully many more to come.

And those are my tips, tricks and guidelines for you on make sure you are a success on a first date so that you have chance of making it to round 2 🙂

Marni's Comments: I love these little tips that Sarah gave to help you navigate your dates and avoid screwing up.  I wanted to add 1 more really important tip.

It's called making sure YOU have fun.  YOU being the emphasized word here.  Dates and dating are also for you.  I talk to so many men who forget this. They forget that it's not all about the girl. It's about the 2 of you seeing whether or not there is something there that can carry through to more.

Whether that more is sex, another date, dating, marriage.  YOU still have to be part of that process and present so that you can really put out your needs, wants and personality to see if you guys mesh.

So YOU have fun on your dates.

YOU choose something you enjoy to do on the date and see if this girl can “hang”.

YOU talk about things that are important to you and see how she responds.

YOU see whether or not this woman is worth YOU further investing your time.

Don't forget about YOU.  It's one of the most important parts of your dating life 😉