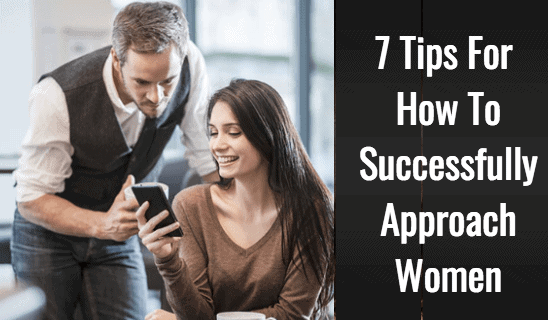 This post is going to tell you 7 Tips For How To Successfully Approach Women to make approaching women easier, less scary and lower you chances of rejection.

No matter how much dating wisdom and advice you learn, if you can’t approach women then you’re never going to get very far.

Even though it’s the first step and only lasts for a few seconds, it’s still the one area of success with women many guys struggle with the most.

And every time I go out, I see lots of men making the same basic mistakes over and over again.

So here are 7 tips for you that when followed, will make your approaches more impactful and successful.

This one is huge. If a man can’t make and maintain strong eye contact with us, we assume he’s either sketchy or has very little confidence in himself.

Obviously, you don’t want her to place you in either of those categories as you’re approaching her.

That’s why if you’re approaching her from the front where she can see you, you must hold eye contact with her and not look away, even if you’re nervous on the inside.

You want your gaze to appear relaxed and warm, not intense and scary. To do that, you can narrow your eyes a little, while also incorporating tip #2.

If you just hold eye contact with a really serious or blank expression on your face, it’s more likely to frighten us than turn us on.

You need to smile so you look friendly and non-threatening and make us comfortable with you approaching us.

I’m not talking about a huge cheesy grin here, however. A simple close-mouthed smile, or even a bit of a smirk, is enough to help put us at ease.

#3 Assume she already likes you

One way to be more confident holding eye contact and smiling while you approach is to assume she already likes you.

If you think of her as some scary woman who may reject or ignore you, that’ll be reflected in your body language. You’ll look like you’re nervous and expecting something bad to happen, which in turn makes us feel nervous around you.

But when you have the mindset that it’ll go great because she’s already into you, then you’ll appear more confident and sure of yourself.

Take a look at some of the biggest male sex symbols in the world. Very few, if any, have fast and jerky movements.

Instead, they move smoothly and deliberately, at their own pace.

That’s because slower movements are equated with a relaxed confidence. A man who moves smoothly appears more sure of himself, and is thus more attractive to women.

It’s a proven fact that people prefer to be around those that are positive instead of negative.

When you’re negative and pessimistic, it conveys that you’re not happy with your life and things aren’t going well for you.

And if you approach women with this kind of energy, we’ll assume you’re basically miserable because your life sucks… and why would we want to be a part of that?

However when you’re positive and upbeat, it makes you seem more fun and charismatic.

We’ll assume your positive vibe is because other people treat you well and you’re generally kicking ass in life. That’s the type of man we’re happy to have approach us anytime.

To make a strong impression, it’s important that you’re not using tired and lame lines that we’ve heard a million times before.

In a bar, that would be asking if you can get us a drink, or if we have a boyfriend, or anything else unoriginal.

In daytime settings it might be asking us if we have the time, or for directions… and then after we reply, trying to continue the conversation by asking where we are from.

There are others of course, but these are some of the most common.

Sometimes when you approach a woman, she’ll be receptive and clearly into you before you’ve even finished your opener.

However, you can’t expect that to be the case all the time.

After all, we get approached by a lot of men… and we’ll usually want to see what you’re made of before we’re sold on you.

That’s why some women will only give you a lukewarm reaction, or even a bit icy in some cases. She’ll often want to see how you react when presented with a challenge and things don’t easily go your way.

If you give up immediately and walk away with your tails between your legs, she’ll feel like she saved herself from a man who can’t handle obstacles life throws his way.

But when you’re prepared for a little resistance and clearly not shaken or upset by it, that definitely makes us more interested in you.

One caveat though to this last tip is you don’t want to be persistent to the point of annoyance. If she makes it clear that she’s really not interested, and you don’t accept that, then you come off as a pest and a creep.

Now, these 7 tips will go a long way towards making sure you set yourself up to make a positive impression when you approach any woman.

But how would you like to have the complete picture on exactly what to do and say to make us interested and attracted?

I’ve released a new program which some are calling the bible of approaching women.

This is the most effective and detailed program on how to approach women ever created. And it’s written by one of my Wing Girls who is a model and has been approached over 32 000 times.

No other dating coach has this  same level of experience, and you’ll get to hear all her secrets as she holds nothing back.

This new program is called The Approach Blueprint, and you can get all the details on it right here. 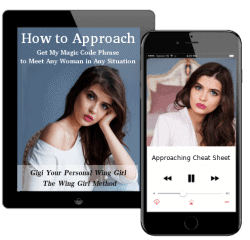