You could be killing your chances with women by making these THREE fatal flirting mistakes. Read and learn what NOT to do! (You can thank me later!)

I’m sure you know by now how important flirting is for attracting women. When done right, it’s one of the most effective ways to make us want you.

However, a lot of guys make some simple flirting mistakes. And these mistakes really ruin their results with women.

So I’m going to share 3 of the most common flirting mistakes with you now… as well as how to correct them.

There are many techniques you can use for flirting. And the more you use, the more you keep things interesting and unpredictable.

But when you just use the same technique over and over again, it gets boring. An example of this is teasing. When a guy sees that it gets a good reaction, he’ll often overdo it to the point that it becomes annoying.

Another one is cheeky compliments or showing interest. A little can go a long way, but too much and it’s off putting.

That’s why the push/pull technique is so effective. You’re mixing up showing some interest with teasing and being a challenge. It’s unpredictable and keeps us on our toes, so we’re not quite sure where we stand with you.

If you want to know how best to use push/pull — along with examples — then check out this program here.

#2 Making it all about you

Flirting is a participation sport. For it to be effective, there needs to be two people involved. Which is why it’s strange that so many guys treat flirting as a one-man show.

It’s like they have a whole bunch of scripted lines or techniques they’re determined to use no matter what. And anything a woman says or does barely registers, as they rattle off the next line they had prepared.

From our point of view, this feels fake and flat. We can tell that it’s not genuine, and you’re not really listening to us or responding to what we give you.

To flirt effectively, you need to really pay attention to the woman in front of you and acknowledge what she says.

Flirting is best when it’s playful and fun. When it feels serious or intense, it can put too much pressure on us. We might be worried you’re going to take it the wrong way and try to escalate things before we’re ready.

And without the playfulness, a guy’s flirting attempts can sometimes come across as creepy instead. So if you’re making this mistake, how do you fix it?

The easiest thing you can do is to smile more! This sounds like an obvious thing (and it is), but you wouldn’t believe how many I’ve seen who don’t smile when flirting.

I think in their minds they’re giving off a smooth and secutive vibe… But to us, it can feel more like a serial killer vibe. 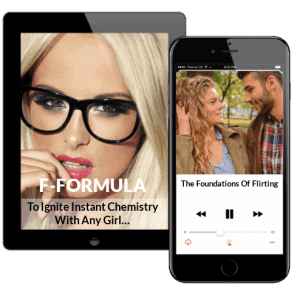 So smile. Lighten up. Have fun!

The more you actually enjoy flirting, the more we’ll eagerly flirt back with you 🙂

And if you want a proven blueprint for flirting with any woman in any situation, you need to click here and see my proven method.