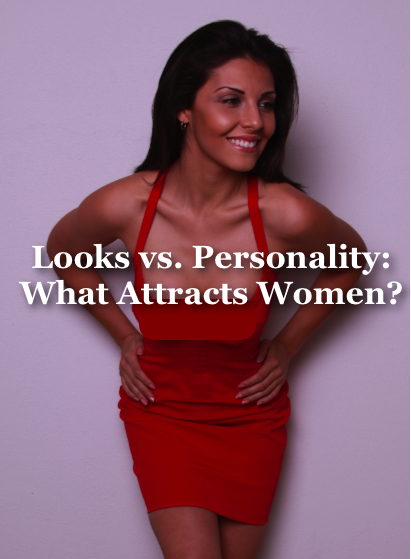 I wanted to share an interesting, yet common story about attracting women.

I am sure many times in your life you have been walking down the street and saw a beautiful women with an unattractive man and said to yourself “something is wrong here. Why is she with that guy?” I am sure you could not understand it. That is because you could not see what women see and that is energy. The energy that has been attracting women for centuries.

This is the confident, self assured and comfortable energy I have been describing to you since day one.

Unlike men, women are not primarily driven by looks. Looks can be overridden by personality to a point where a man's features can totally transform in the eyes of a woman.

I recently sat down my friend and former Playboy model and we got into a conversation about looks vs. personality. She shared an interesting story with me so I asked her to jot it down so I could share with you. This story is about meeting the not so expected love of her life. This story will tell you if when attracting women, if looks matter.
*******

Looks, I thought used to be very important to me until the man who made that seem last on my list.

I remember it was a late winter evening. I was running behind and had gotten lost on my way to a first date. By the time I finally got there my stomach starting feeling like it was eating my spinal chord and I had just assumed we would stay at the restaurant where we met. But, he had changed his mind and wanted to go up the block to a little place he'd heard of.

My date, (a good-looking, late 30's, Real Estate Broker) and I arrived at this great little Italian restaurant about twenty minutes to closing. The Gentleman, (an overweight, mid 30's, Matier'd) who greeted us said they would love to have us stay and enjoy a meal, (even though it was completely apparent no one else was in the restaurant). We couldn't resist! I noticed there was something unusually appealing about the Matier'd. He politely sat us and motioned over to the server. “Bon Appetit”, he said as he handed me a menu.

My date and I shared some opinions over the real estate market and the neighborhood we were in while sipping our Chianti and devouring the Muscles Marinara we had ordered just to start. By the time the entrees arrived, (Zuppa de Pesce with the freshest Burrata I'd ever tasted for me and Pappardelle with braised Veal Bolognese for him) I came to the conclusion that my first date was going pretty well. And, I hadn't cared less! Although he was good-looking and successful, I couldn't stop looking over at the man who sat us trying to figure out what it was about him. He had a tall build, dark intense eyes, and he was overweight! But, his mannerisms were extremely confident and there was an air about him. Overall, still NOT the guy that catches my eye. Especially, when I had the attention of a beautiful man sitting right in front of me. So strange, when I look back on that night. I've never been that drawn to someone so instantaneously .

When the server came to ask us for dessert I had already decided that I wanted to find my own way home so I could share at least a few words with this man I found to be so unusually appealing. Dessert seemed to have went by like an eternity and the double shot of espresso made me even more anxious for dinner to be over and for me to act on my curiosity.

Finally, dinner came to a close and my date politely said good night out front when I told him I was going in the opposite direction. He kissed my cheek and waved as his cab turned the corner.

After standing out front for a few moments, willing my new crush to come outside before the next taxi pulled up. I heard a man's voice ask if I was, “all set”. I turned to him and said, “Yeah. Just waiting for a cab.” He nodded politely and stepped outside with me. He began asking me the normal questions you do when you first meet someone, “What's your name?, Where are you from?, What do you do for work?, yada yada yada” but it wasn't what he was asking me, it was how he asked it. He didn't turn his eyes away from me once while I was speaking. I felt his eyes going over every part of my face as I spoke to him and answered each question like it was the first time I'd ever been asked this information by anyone! I could feel him studying my lips as the words came out of my mouth, my hair as I pushed it away from my face, and my eyes when I actually worked up the nerve to look into his.

He made me feel shy and sexy at the same time. Something I never felt before. And when he directed his attention towards me it was fully and honestly. He had a confidence about him that I never saw in any other man. His confidence came from knowing what he wanted without being afraid of it.

After a few polite exchanges, he asked me if I hadn't liked the tiramisu my date ordered for us, (I assumed he noticed how anxious I was). I replied with what I hoped would catch his attention instead of the truth, (which was that I couldn't be bothered with anything else besides him at the time). So, I said in the most sultry voice I could, “I don't feel like tiramisu tonight.” He turned to me with surprise, looked at me as if I had said something wrong, and as I turned away not knowing if I had just made a fool of myself, I secretly wished he would ask me to explain why I wasn't in the mood for tiramisu over some coffee together. And like an attentive man should, he noticed, turned back to me, looked me dead in the eye, and said what I expected least, “Do you like puff pastries?” That was him. Corny, but funny. Charismatic and strong. It didn't take long for me to fall in love with him.

I always used to wonder how woman found certain men attractive, but I think some men really understand that a good woman just wants to be with a man we feel special with. A man that makes us laugh. We dated for a little over a year and I choose to see him as the man who showed me that being so superficial for the rest of your life is such a bore! Grazie. And yes, you're right. This is L.A. And it is hard to find someone that has more than just looks to offer. But, on the most exclusive lists in “Tinsel Town”, looks are last in line and it's all about the swagg, Gentleman! Work it.

If you want to hear more secrets of attracting women and getting women you should check out our newest program called What's Inside A Woman's Mind. 20 women, 10  hours and honest conversation about what attracts women.