It does not always matter what you say. The biggest turn-offs for women is something guys do that can turn women away without saying a word.

One of the easiest ways to blow your chances with a woman is with bad body language. Body language is critically important because it communicates so much about you. Yet, I see so many guys unknowingly turning women off with their body language mistakes.

It's believed that body language is responsible for 55% of communication. This means if you’re getting this wrong, you miss out on more than half of the opportunities to attract a woman.

But when you nail your body language, it makes you more attractive and charismatic without any extra effort. Unfortunately, it’s not possible to give a full A-Z guide on body language in an article.

However, here are three of the biggest body language mistakes that are the biggest turn-offs for women men regularly make. Simply eliminate these three things and make a big difference in how women respond to you. 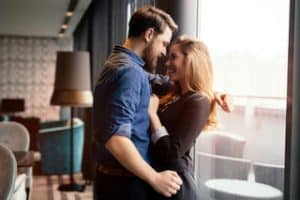 You probably know that being needy is one of the biggest attraction-killers with women. It’s why you wouldn’t shower a woman with compliments and tell her you couldn’t live without her when you first meet her. Because that would make her run a mile.

Yet a lot of guys are sending a similar message with their body language, even if they’re not saying that with their words. There are a number of ways you could be displaying needy body language.

Invading her personal space is one example, unless she’s giving you positive signs to do so. I have seen this happen numerous times. The woman will take a step back to show she’s uncomfortable, but the guy will move forward into her space again.

And I get it guys desire to be close and to show interest, but they have to also pay attention to the cues that she gives you for when to move in. For instance, if a woman leans into you and keeps touching you those are a couple of signs that it's okay to get closer. For instance, in the image below the woman is making strong eye contact, touching the man on the arm and enjoying being close to him. 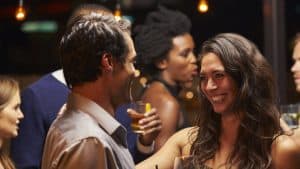 But if she's literally leaning back or positioning her body away from you or stepping back from you. Well, that's her polite way of saying that you're too close and in her personal space.

Another one of the biggest turn-offs for women is giving away 100% of your attention and interest if she’s not reciprocating. So if you’re facing her front on and constantly looking at her, when she’s turned away from you and only glancing at you now and then, you’re not reading her cues of disinterest and in this case, it may actually be wise to move on to talk to another woman. 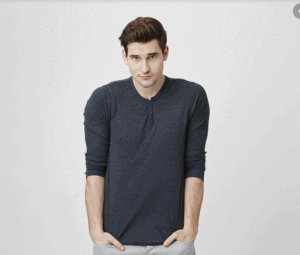 Another body language mistake is what I call making yourself appear small. This is when you don’t take up all of the space around you. It could be that you’re hunching over and not standing up tall.

Or you might be standing with your arms by your side, hands in pocket, and legs too close together. Anything, where you appear smaller than you actually are is usually a subconscious attempt to hide.

It conveys a lack of confidence, either because you don’t want to be noticed or you don’t feel entitled to take up space around you.

One way to fix this is by spreading out. If you're standing take a wider stance. If you're sitting, let your legs splay a little bit like you would sit on your couch at home when you're fully relaxed. When you're sitting you can also rest one of your elbows on the back of your seat. This works well when you're in a booth.

When you take up space you subliminally communicate confidence and that you are relaxed with her.

When someone is nervous, it’s common that they fidget or have fast and jerky movements. It’s because their body is looking for ways to get rid of that nervous energy. So when women see that kind of body language in a man, it makes us uncomfortable. We realize he’s feeling nervous, and wonder why. If we don't realize it then it makes us edgy because it makes us think that there's something wrong, but can't pinpoint it.

Either way, we don’t feel attracted or comfortable when it the presence of a man with this type of body language. That uncertainty is one of the biggest turn-offs for women.

The more relaxed, calm, and slow your movements are… the more confident and safe you’ll appear.

So there you go. Make sure you’re not committing these 3 body language sins and you’ll instantly be more attractive to women.

But if you want the complete blueprint on how to be attractive to women, that goes far beyond just body language…

Then you’ll want to check out my best-selling program that turns any man into the type of guy that women can’t resist.