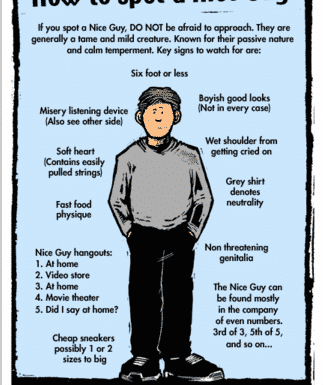 OMG, I love the article I've posted below. Believe it or not, my dad sent it to me. YES, big reveal. I have a father 😉    He's definitely a Nice Guy and I'm glad he is.

Read the article below because it's awesome and I agree with everything Laura, the writer, says:

An Open Letter To All The Nice Guys Out There:
Don’t Stop Trying

Contrary to popular belief that you might finish last in this world, you absolutely come first for me. And not just for me, for a lot of other girls, too.

We want you, Mr. Nice Guy. We want the honorable man who is motivated by the kindness of his heart, not by what he can wager in return. The guy who doesn’t expect a reward for being a good person. Who especially doesn’t see himself as a woman’s means to an end.

So stop reading here if you think being the nice guy is as surface-level as paying for dinner or walking her home or telling her she looks beautiful. These gestures don’t automatically make you kind, especially if they’re backed by ulterior motives. You can pay for the meal, but still be cruel company. You can ensure she makes it home safely and simultaneously make her feel uncomfortable. It’s less about your actions and more about the quality of your intentions.

Most guys who are convinced they are nice, aren’t. Girls can smell the difference. Truly nice guys have honest, pure objectives. They won’t be angry if you don’t sleep with them afterwards, or put that kind of pressure on you in the first place. They want to be in your company simply because they enjoy being in your presence. And yes, that’s enough for us, too.

Because being nice doesn’t mean you are weaker. And this is where the confusion happens. You can be masculine, tough and assertive while at the same time good-hearted and well-intentioned. It’s kind of like having a rough or intimidating exterior, but being a total sweetheart on the inside.

That’s the kind of mystery and excitement we women are attracted to — not this notion of a bad boy who brings drama and pain. We don’t want the unavailable bad boy who has burned us countless times. We’re smart girls and we know better than that. We know the good ones when we spot them.

It’s not that we don’t want you, Mr. Nice Guy. It’s that it’s really hard to find you. So, in the meantime, we date a bunch of not-as-nice-guys in hopes that maybe we’ll find you when we least expect it. We’re holding out for you though, so don’t give up on us Nice Girls because you think being an assh*le is better.

After all this waiting around and failed relationships, we want the good guys who are uncomplicated and sweet. The girls who say they do but don’t or who can’t appreciate these men aren’t good girls, either.

These are the girls who discourage Mr. Nice Guys like yourself from pursuing more women. These girls aren’t ready for a relationship like the one we have been preparing all these years for.

Nice guys are the ones who don’t have to question their actions. Who are smart enough to know that when it didn’t work out with an ex that it wasn’t because they were too nice. Both good and bad people experience terrible things and failed relationships, which is independent of their character. One has no bearing on the other.

So, Mr. Nice Guy, what’s it going to be? Are you going to give up being nice and toughen yourself from love, as you’re so tempted to do? If you want to prove you’re not as weak as you may think you come across, you’ll keep putting yourself out there for us. Because we nice girls haven’t given up on you.

I know one day we’ll cross paths. I know it might not be head-over-heels or drama or fireworks. I know it will be heart-warming and genuine.

And to me, that sounds nice.

Marni's Comments:  I love everything that Laura said and she's so right.  Hopefully, this article gave you a clear cut description of the type of man women want and respect all at the same time. It's the kind of guy we pray for and hope we meet.  The kind of guy that we want to be with. The kind of man we women want!!!!