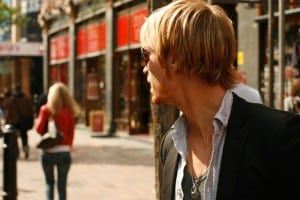 Do you have approach anxiety???  Well, guess what? So does 85% of the population, so you, my friend, are not alone.

Approach anxiety is really just anxiety of the unknown. Fears of what COULD happen and our attempts to always control an outcome. I want to tell you something. You will NEVER be able to control an outcome especially from women. You know how unpredictable we are for goodness sakes!!!  So how are you every going to control what happens when you interact with us?

You aren't! But what you are going to control is YOU and how you feel about the approach and interaction.

I got an email today from one of my Email Coaching Clients who I'll call H that I wanted to share with you. It's a great email because H says every fear that I know runs through your mind when you want to approach a woman.  And what I do as his Wing Girls is help him calm all his fears. Hopefully it will do the same for you.

H's Email with my responses in bold:

Marni, I had this question eating my head for quite some time.

Do women love being approached by random guys they don't know. My response:  YES, as long as it's the right guy approaching her. A creepy guy with nothing to offer NO. But an awesome guy that catches her attention YES.

Is it like an ego boost being approached? Of course! It feels awesome when someone acknowledges you as attractive. But again if it's the wrong guy who doesn't take the hint the ego boost goes away and it just becomes annoyance.

Does it feel nice being approached? Sometimes. Again, depends on who is approaching us.

Or is it like an invasion of privacy? Sometimes. Again, depends on who it is and how they approach. I've had and seen many guys who literally just lurk around and then finally approach and have nothing to say AND THEN won't leave.  This is when things get creepy and it feels like an invasion of my space.  Other guys are too aggressive and won't take a hint when women politely ask them to leave them alone. Of course they do it in their subtle yet feminine way so it's not overtly rude.

Does a guy who approaches appear needy? Sometimes, if he doesn't approach correctly and if he's acting needy!

2) what if she has a boyfriend or husband You're not going to figure that out from a mile away so approach. She'll tell you if she's taken. AND if she is, then she's a great candidate to be your very own wing girl. Put that girl to work!

3) what if she is an introvert What IF she is an introvert?? Introvert does not mean shy or quiet. It means that she gets recharged when she is alone instead of around people.  If she's that way then hopefully she's had her time recharging and is now ready to talk 😉

4) what if i come across as a wimp? What if you do?? Are you a wimp???  Probably not, so then why would you come across as one.  As long as you don't think your a wimp, then who cares. Be proud of all your actions and ALWAYS go after what you want. In my mind that does not define wimp 😉

5) what if i mess up? You won't.  And I'm not even really sure of what messing up means. You mean what if she says No?? That doesn't mean you messed up, it means she didn't want what you had to offer. The real mess up happens when you miss opportunities.  Keep reading my materials and go check out my new book Get Inside Her and that will give you the tools you need so that you don't mess up with women AND you won't think you've messed up!!!

I hope you can answer these questions Marni! I hope I was able to H 😉

You know why I know that these questions are so common and why approach anxiety is so normal? Because I used to ask them to myself.  I used to have these irrational fears of the unknown and worries about being rejected.  I still do from time to time. But you know what I realized? It's worse not going after things and it's even worse not knowing.

What I did to get over my approach anxiety was I learned to do things in baby steps so that I did not have HUGE outcomes attached to my actions.  So I no longer thought, there is a person I want to talk to and when I talk to them they will be totally charmed by me and then want to hang out with me and give me XYZ….  That type of thinking is what can overwhelm you and stop you from taking action. 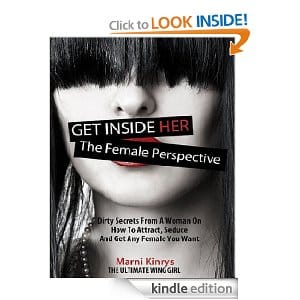 And now I want you to do the same so that you can get over your approach anxiety. Break it down into little steps and at each step you complete, pat yourself on the back.

I also want you to go check out my best selling book on Amazon Get Inside Her: Dirty Tips and Secrets on How To Attract, Date, Seduce and GET Any Female You Want which has nearly 300 pages of tips, tools and advice on how to get the girl every time!!! Click here to find out more.