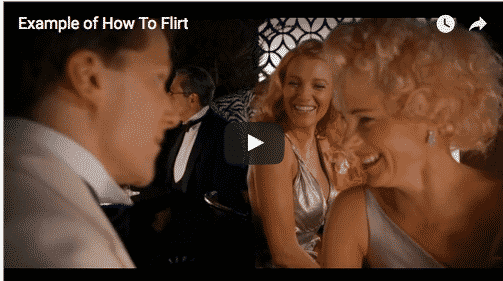 I finally found it!!!!! Well, one of my clients did. If you recall, a few months ago I emailed you about this great scene in Woody Allen's New Movie Cafe Society, that was an awesome example of how to flirt with women.

At the time, I could not find it online but desperately wanted you to see it. Yesterday, I got an email from one my clients saying he found it and he quickly sent it over to me for me to share with you.

The reason I love this clip is because the male character isn't your typical “movie hero, stud” and he pulls off flirting with BLAKE LIVELY masterfully.

He doesn't do it super smoothly. He isn't suave. He isn't overly attractive…

What he is though, is comfortable in asking for what he wants and even more comfortable with her not being open to his obvious attempts to flirt with her. Every time she kindly rejects his advances, he comes back even stronger and he does it with a smile on his face.

Check out this scene from Cafe Society and then read my comments below the video.

This attitude held by Mr. Flirt, is the perfect example of assertiveness and persistence.  It's also a great example of flirting done right.  What I see when I watch this clip is a fun, playful verbal volley ball game.

Mr. Flirt serves by opening up conversation with Blake's character.  Blake's character slams that serve back into Mr. Flirts zone and instead of dropping it, defeated by her strength, he smiles and hits that ball right back with oomph.

And so the volley continues. It's fun, builds excitement for both the players and the spectators.  It's a damn good game to watch and awesome to be a part of.

This IS flirting. The fun volley back and forth that builds attraction, intrigue and curiosity.  It's a game that anyone can play with a little practice, confidence and the ability to be unshakable by a an attractive, female player.

I really wanted you to see this example because it's rare to see someone like Mr. Flirt in the media/movie's pulling off flirting so well. We typically see an attractive, suave lead character who's meant to be a dork, flirting with a girl.  These clips are annoying because in our minds we think “of course this guy can pull it off. Look at him.”

But this clip is different and it's not the magic of Hollywood that makes me, a female spectator, attracted to Mr. Flirt. When watching this clip, I could feel Blake's attraction and excitement.  I was literally at the edge of my seat because I could imagine this happening to me and how I would feel in that moment.

I've had guys like Mr. Flirt, flirt with me like this and it's exciting.  What I was liked and was attracted to was that Mr. Flirt allowed the rejection to fly past him and didn't give up! He was not phased or rattled by her responses and was was totally charming. Being like this with women opens the door to possibilities and options.

I'm so glad that my client kept searching for this clip because I think it's a solid example of how to flirt with women and something that you can easily replicate as long as you don't let HER response, crush you.  Volley back with her and I promise you will get the response you are looking for.

FYI – I'm putting the final touches on my product for how to flirt with women called The F Formula.  I promise, I will be releasing it soon 🙂  Stay tuned!