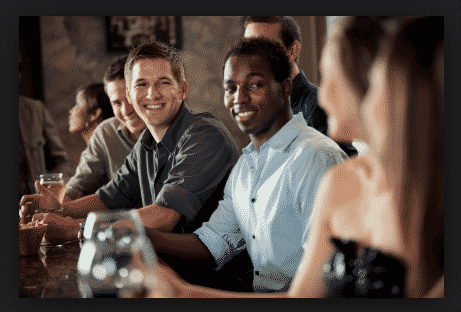 WOW… my last few newsletters about being direct with women and clearly asking for what you want were like a roller-coaster of feedback. (If you missed them I'll be posting them on my blog shortly)

Some of you were confused, some of you needed some explanation, but for those of you who got it…

I'm super excited to hear about how you used what I told you to get some action over 4th of July weekend. 😉

Now look, if you were confused, or you needed some explaining, or maybe being that direct just isn't your schtick…

These next few emails are going to be a TREAT because I'm going to be unveiling The Wing Girl Method's in-depth method for being “indirectly direct” while approaching a lady of your choice.

I say it's “indirectly direct” because the way you'll be approaching women and talking to them will be seemingly indirect, but will still show a clear intention…

The intention being “you're cute. I want to talk to you and get to know more.”

If this is all going over your head right now, don't worry because it shall all be explained over the next couple of days.

So without further ado…

The O.S.A. Method is the method that I created for my personal clients back in 2006, and it's the best method for approaching women, and striking up a conversation.

In fact, it's the approach that, of the 5,000+ women I've interviewed over the past decade, say they respond to the most.

It's not a direct approach per se because you aren't just coming out and saying what you want, BUT it allows you to:

2) Break into conversation with a woman and then decide whether or not you enjoy her, and still feel the attraction, because making an exit with this approach is as easy as pie

But I think the most important part of the O.S.A. Method is that it completely removes all annoying formalities. It takes away the “interviewer” mode of conversation that most guys attempt to go into, which makes women immediately put up barriers…

So what IS the O.S.A Method?

Well, as you've probably already guessed it's an abbreviation (duh!) and the first letter stands for…

Picture for a moment you're in the mall, and you see a pretty hot girl, nothing out of the ordinary right?

But you see that she's wearing a scarf… in 90-degree weather.

So as you pass her by you simply make a statement about your observation, something like…

You've got a giant smirk on your face, and your body language is relaxed and confident.

Your body language and tonality are 90% of how you communicate who you are, so you have to get that right but…

What you've just done by letting her in on YOUR observation is:

A) You've just cut directly into the middle of a conversation therefore skipping all formalities like “Hey my name is…” or “Can I talk to you for a second”.  She won't (and more importantly, can't) put barriers up because there's nothing to actually put barriers up against. (<- super important!)  Instead, she'll most likely just stare at you.

NOTE: Don't take this as a bad thing. It just means you've gotten her attention.

B) You've just demonstrated confidence through your body language, tonality, and the fact that it takes major balls, and really awesome social skills to pull off being completely in your own “stream of consciousness”, and pulling her into it.

Oh and the observation doesn't just have to be about her.

It could be about anything.

A simple shortcut: just state, out loud, EXACTLY what you're already thinking.

Think of it as being a 5-year-old kid again without a filter who's intrigued and curious about everything.

Tomorrow we'll dive straight into the next part of the O.S.A Method, and if you do this one thing, you'll completely suck her into YOUR world.

So keep an eye out for it!

Oh and before I go, if you like formulas like the O.S.A. Method that are not only powerful but easy to remember and apply in real world situations, then you should check out my L.C.A. Method.

They work hand in hand because while OSA cracks open the door and lets you get a foot in… Once you decide you're interested in a girl, you use the LCA Method to literally get her ADDICTED to you.

You can learn about in my program “How To Become A Man Women Want” here: