It’s no secret that confident men have an unfair advantage with women. Women naturally love, even lust after a man who appears to be confident. 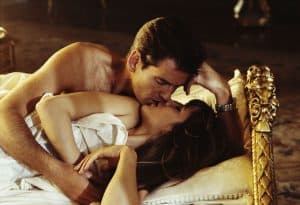 Confident men do certain things differently compared to most guys; that’s why they can attract almost any woman without seeming to break a sweat.

If you simply model these things, you’ll find women swooning over you without even trying. Even the ones you thought were “out of your league”.

The first thing confident men do which most guys don’t is they look into a woman's eyes when they speak.

#1 Look into her eyes when you speak 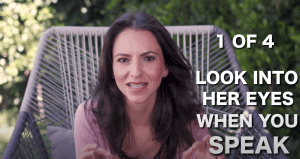 Making eye contact while listening is easy, almost everyone can do that. When a man can look into our eyes when he speaks, it shows he isn’t shy or nervous.

It shows rock-solid confidence. By making eye contact when he speaks, he holds our attention, and unconsciously sparks attraction.

It’s a simple little thing, but the effect is enormous!

I have seen a lot of guys struggle with making eye contact when they speak. If you’re one of them, I have a cool hack for you.

Start making eye contact with women you speak with for approximately 3 seconds at a time.

Break eye contact after 3 seconds. And then repeat the cycle as many times as you can.

Think of it like a game if you will. Play this game often, and you'll become comfortable making eye contact almost overnight!

As a result, you’ll appear insanely confident to any woman you speak to.

The second thing that confident men do differently is they 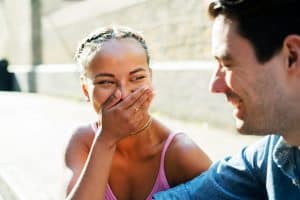 Making jokes is a social risk. Especially when you’re talking to a stranger or someone you don’t know properly.

You risk coming across as weird, lame, or even inappropriate.

That’s why most guys stick to safe, mundane stuff. Things like “what do you do for work?”, “how was your weekend?” or “where are you from?”.

Confident men are different. They’re not afraid to be silly and playful.

They’re not afraid to make jokes, tease us and indulge in playful banter. They risk coming across as lame, weird or inappropriate.

Yet, they don’t care as long as they are enjoying themselves. As a result, not only do they show confidence, they also make the interaction fun and engaging. Because of this our attraction for them skyrockets.

So, next time you’re talking to a woman, don’t be afraid to goof off a little; be silly and be playful.

You’ll be surprised at how well your interactions go, and how easily you spark attraction.

You see, women are never sexually interested in a “yes” man who agrees to everything they say.

Why? Because these guys come off as needy people pleasers with low self-esteem. In fact, these guys end up in the friend-zone most often.

All that adds up to a man every woman would want to have. 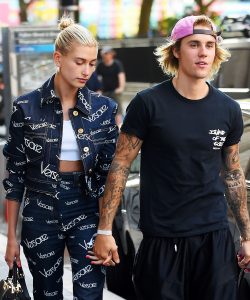 Confident men are proactive. They are leaders. When they see a girl they like, they’ll approach her and risk being rejected.

They will lead the conversation from the get-go without seeking any validation.

If they want to go for the kiss they will go for it.

If they want to take the girl out on a date, they won’t say “Hey, will you go out with me this Saturday?”… (​said in a low-volume, submissive tone)

They will tell the girl “Let’s go grab a coffee at Starbucks this Saturday!”

Taking charge shows you know how to be more confident than the average guy.

When you take charge, it establishes you as the high-status alpha male women crave to be with.

One of the main reasons girls love fictional characters like James Bond, Christian Grey or Don Draper is because they take charge.

Plus, a side-benefit of taking charge is you get women used to following your lead.

Establishing the “leader-follower dynamic” makes a woman 10x more likely to go out with you, sleep with you or become your girlfriend.

Now, if you start emulating even one of these strategies you will be stunned to see the way girls start treating you.

Though, I must confess there is one missing piece in the puzzle.

There’s a fifth thing confident men do really well which most guys are UNABLE to do.

And that’s flirting; the ability to ignite sexual chemistry with any girl you meet, in a matter of minutes!

Most guys SUCK at flirting. They can’t flirt their way out of a paper bag.

As your personal wing girl, I can’t let you be one of those guys.

That’s why I want to show you the most effective, step-by-step, formulaic approach to flirting with any girl you like.

This formulaic approach has been tested on thousands of girls and has proven to work like magic.

You just apply the formula and see results instantly. It’s that powerful.

To find out everything about this flirting formula go to www.winggirlmethod.com

I made a special video for you where I reveal what this formula is all about.

Click here to watch the video. I’ll see you there!