I will tell you exactly how to make a woman laugh. Everyone knows that women find a sense of humor attractive.

There are so many different types of men that women like. But there's one type which stands head and shoulders above all.

The one type of guy that absolutely no girl can resist is the funny and playful guy. The guy who can make a woman laugh.

This type of guy has a massive unfair advantage, whether it's over text or in person.

There's a reason why 89% of women say that a sense of humor is the number one trait they look for in a guy.

But what if you're not a natural-born funny guy? What if you can't come up with witty and clever things to say when talking to a girl? Or doesn't know how to make a woman laugh?

Well, these five joke types or five joke formats can be used in any conversation and make girls smile, giggle, and laugh.

And I'm gonna help you be funny even if you don't consider yourself funny right now and you will learn how to make a woman laugh with ease. 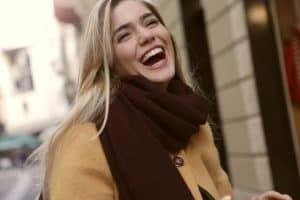 These are five easy laugh tactics used by the world's top comedians, and today, you get to steal them for yourself.

As you start using them in your conversations with women, whether in text or person, you will see them pay more attention to you, engage with you, and start to really really like you.

Sometimes, to be funny, all you need to do is react.

You don't have to say or do anything proactively. It's the way you react or overreact to something mundane or funny that makes you funny.

The trick is to commit to the reaction and be a bit over the top. So imagine a girl is telling you a long story of some sort.

Just to tease her a little bit, you could yawn or pretend to like, nod off, or something as if she's boring you to sleep, and this will definitely push her buttons a little bit which you want but will also make her laugh.

Just make sure you let her continue her story after you do your bit, and you'll be totally fine.

Here's another example of this overreaction joke type. Let's say a girl says something that you don't agree with, which I'm sure happens a lot.

Maybe she says:
“You know, I really love pineapple pizza.”

To use the overreaction tactic, you could just look at her in shock, stand up, and walk away.

Suggesting you can't even be near her after hearing what you just said. And trust me, that alone will get a really good laugh from her.

It's so simple, but it's so powerful, and it's so funny, honestly. This type of humor doesn't need to be super witty or clever in any way.

All you need to do is react to something exaggeratedly or absurdly.

The Deliberate Misinterpretation… Effective To Make A Woman Laugh

I've talked about this tactic in many different videos, but it's worth repeating because it's effective.

Deliberate misinterpretation is when you take something a person says and interpret it differently than they intended it. So here's an example.

A girl tells you:
“I don't sleep with guys on the first date, so don't get your hopes up.”

And you reply with:
“That's perfect. We can sleep together before the first date.”

Then see how you deliberately change the meaning of what she said. 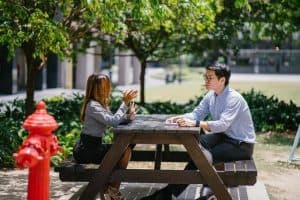 So here's another example.

You could reply with:
“Look, I know you want to see me without this shirt on, but it's not like the perfect time or place for it.”

See how smooth and flirty that is. This type of joke rarely fails to get a laugh, and it's guaranteed to make a girl like you more instantly.

But you got to be in the moment to spot these opportunities. So if you listen to a girl carefully, you'll find many occasions to use deliberate misinterpretation and make her laugh.

Misdirection is when you say one thing and then say the immediate opposite. It's a classic two-part joke.

First, you say something to set expectations in one way. That's the setup, and then you break expectations by going in a totally different direction. So that's the punch line.

This might sound a bit complex now, but let me give you a couple of examples, and then I think you're totally going to get it instantly, or you'll have to watch this a few times, but here's example number one.

Imagine you're talking to a girl who's wearing a pair of torn jeans, and you could tell her:
“Wow, I love your jeans. It's got a really cool homeless vibe to it.”

Do you see what happened there?

First, you said I love your jeans implying that you love her jeans and she's super stylish, but in the second line, you immediately change direction and tease her by saying that it's got like that nice homeless vibe to it which is classic misdirection.

So you set expectations one way, and then you went the opposite direction. So here's another example.

Let's say you're on a date with the girl and you have a burger that you don't really like, which happens quite often.

You would say, or you could say:
“Wow, this burger is awesome. It seems like it's fresh out of the garbage disposal.”

Once again, you set expectations in one way, and then you went in the opposite direction, so that unexpected shift is what makes misdirection work so well.

When you contradict the premise you set in the first line or first few lines, you upset the expectations, so people are caught off guard by it, and they're like what, and it's hard not to smile or laugh.

And probably the most popular joke type on this list of how to make a woman laugh.

I think you know how sarcasm works, and you simply say something you don't really mean or the opposite of what you actually mean. So, for example.

You could be sarcastic and say:
“Four today, but it could be five later.”

Or another example would be a girl who says to you:
“Are you trying to pick me up?”

And you could reply:
“Hell no, I'd never do that without your father's permission.”

Or if she asks:
“How old are you anyway?”

You could say:
“I just turned 97 today. Wish me a happy birthday.”

Very like simple stuff, right? But just owning it with a little bit of practice, you can become a sarcasm master.

You want to make sure you don't overdo sarcasm because that can be really annoying.

And to be honest, this isn't really a joke type per se, but it's the easiest tactic in the world to make someone laugh.

You see, if you laugh or smile yourself while telling a joke or a story, other people around you are bound to laugh. 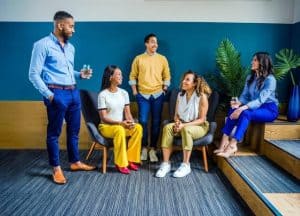 This happens due to the principle of emotional contagion, which says that human emotions are transferable from person to person, and humor or laughter is perhaps the most contagious.

So if you can self amuse yourself, make yourself laugh while saying something like entertaining yourself, that should be more than enough to get the girl laughing.

So there's no need to be clever. There's no quick wit necessary. Just plain self-amusement.

That's it, and thanks to emotional contagion, whatever you say will automatically become fun and funny.

And with that, we're done with our list of joke types or laughter tactics to make a woman laugh, and any one of these can help you be funnier and more entertaining in conversations with women and liven up your conversation.

But I have to mention there's actually one more way to become more fun and witty in conversation.

A faster way, a shortcut if you will, and you'll find it inside the Banter Guide, which I created.

The Banter Guide is a unique program designed to upgrade your wit, sense of humor, and conversation skills over a short weekend.

It dives deeper into joke formats and formulas that you can steal to become funnier. Plus, it shows you tricks to internalize these formulas, so you don't have to think about them in conversation.

You'll simply crack jokes and be witty and charming without any conscious thought, which is amazing.

The Banter Guide also has several little-known hacks to ensure you never run out of things to say in conversation and always have the right response.

Any one of these could save you from those dreaded awkward silences when chatting with a girl you like, and it reveals easy tricks to make up witty comebacks on the fly.

Tricks to make any story engaging and even some amazing last resort tactics to save a dying conversation or revive a dead conversation.

So overall, with this guide on your side, you can't possibly have any trouble talking to women, and there's no need to worry about opening lines, what to say and what not to say once you see what's inside the guide. Things to say will naturally come to you.

It has already helped over 21.000 of my students go from not being able to approach and talk to women to holding endless fun conversations with the hottest girls and walking away with solid numbers and confirmed dates. So there's no reason why I can't do the same thing for you.

Have a look at it. See if you're interested.