If you’ve studied dating advice and learned about how to talk to women for any length of time, here’s something you may have heard:

What it really means is to not get upset or emotional when a woman doesn’t give you a positive response. And that’s great advice…

However, some men distort this advice and take it to mean never react to anything a woman says or in other words, ignore her!

This is especially problematic with guys who’ve filled their heads with a bunch of pick-up artist lines and tactics they’ve been led to believe work like magic on women.

Case in point, I was out a couple of nights ago at a restaurant with some friends.

The couple at the table behind us were clearly on a first date, and I couldn’t help overhearing their conversation. 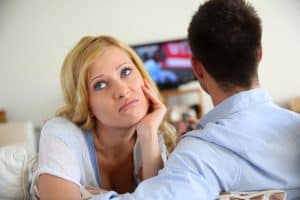 Here's how NOT to talk to women

So they’re talking and she asks him what his job was and he replied, “I’m a butt model”.

A little cheesy and totally a line he learned from someone else but I was okay with it.

But when she quickly followed up with, “No, seriously, what do you really do?”.

And he again repeated his butt model line, I cringed, realizing he had no clue what he was doing.

Plus, the silence from his date confirmed that he was screwing up his chances.

If you’re wondering, “Marni, why do women hate this so much?”

It’s because it feels like you’re not engaging in a real conversation with us.

You know, like one where you actually LISTEN to what we say and RESPOND with an appropriate answer!

Instead, it feels like you’re more focused on spitting out whatever lines and tactics you’ve stockpiled in your head.

As if you were trying to do something TO us, rather than engaging WITH us.

And trust me, no woman likes to feel she’s part of an artificial conversation concocted to get her to spread her legs for you.

One that you’ve probably used with countless other women. 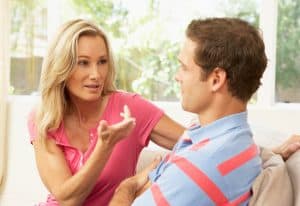 But that’s the perception we have when a man ignores what we contribute to the conversation.

And instead continues to talk about whatever he wants, as if we’d said nothing at all.

It’s being unintelligent and a big an A-hole if you ask me.

And many guys are guilty of this at some time or another, yet are usually completely unaware they’re doing it.

It doesn’t have to be a specific line you repeat, either. It could be a technique that you don’t know when to let up on, such as teasing.

Here is a quick example of how NOT to talk to women I got recently from a recent member of my email coaching program.

He showed me an exchange he had with a super cute girl and was wondering why she wasn’t responding.

Here’s what he showed me that he wrote:

HIM: I know you are falling in love with me…

HER: So you think I'm falling in love with you? I think it might take more for that to happen… lol. The profile pic you have up is that what you look like now?

So this was a good start.  He flirted and got her attention. She responded with a flirt but then went to a REAL question to actually learn more about him.

Again, a good start, and he could have taken the “IN” and went with it.  But instead, this is what he did.

He wrote back with this:

HIM: I know you are thinking about me a lot.  Lol. You can print my latest photo and put it on your wall. What crimes are we going to commit later today? How do you feel about public displays of affection? 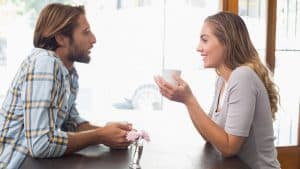 Why do women stop responding?

Because instead of being part of the conversation with her…

He was still on his own path and totally ignored her.

Bad tactic and bad signs for the girl. Hence the immediate halt to the conversation.

Here is what I wrote to this guy:

“No! You had her. Her interest was peaked, she gave a little flirt back and then wanted to know more about the guy who boldly wrote her that she was falling in love with him.

And you totally skipped over that and continued down a pre-written path that had nothing to do with what she responded to you.

I’m not trying to shame you at all and I’m so sorry if it’s coming off that way.  And the truth is that so many men make this exact same mistake and it pains me to see it every time.”

I see this all the time.

A guy might get a decent reaction from teasing a girl at first. So he goes all-in on that and ignores her attempts to steer the conversation towards getting to know each other better.

Eventually, the woman will get annoyed and leave and the guy usually thinks he needs better lines or should have teased her more.

But you know what we really want from you in that situation?

For you to share your own natural, masculine personality with us and give us the chance to connect with you and explore if there’s something between us.

And the way to do that isn’t through more lines and techniques. It’s by getting comfortable expressing yourself confidently and genuinely being in the moment when you talk to us.

Don’t deflect our questions with some kind of cheesy line. Let your guard down and invite us into your world, to see the real you.

This is how you truly become the man that all women want, and it’s explained in step-by-step detail in my multimedia course right here.

Because when you understand this, you never have to worry about what to say next.

The attractive conversation just flows from you with ease, and meeting and dating the women you really want becomes effortless.

If that’s the kind of presence you’d like to have with women, then go here and check it out now.