You can turn a woman on without touching her and get her hot and excited by simply using your words the right way.

You see, the most powerful sexual organ every woman has is the brain. The brain holds the ultimate trigger for a woman’s desire and sex drive. By using your words and flirting with her the right way, you can pull that trigger and unleash her sexual side.

In this article, I’m gonna show you exactly how to do that. I’ll show you what to do to turn a woman on without touching her and just using your words. And, I’m also gonna tell you what common mistakes you must avoid when having a flirtatious or sexually charged conversation with a woman.

What you’ll discover in this article will be extremely useful the next time you talk to a girl you like. You don’t wanna miss any of it.

So, in order to turn a woman on without touching her, you need to have sexually charged conversations. Sexual conversations will get her excited about you and being with you. But the problem is, that sexualizing the conversation without looking creepy or desperate is something most men are unable to do. 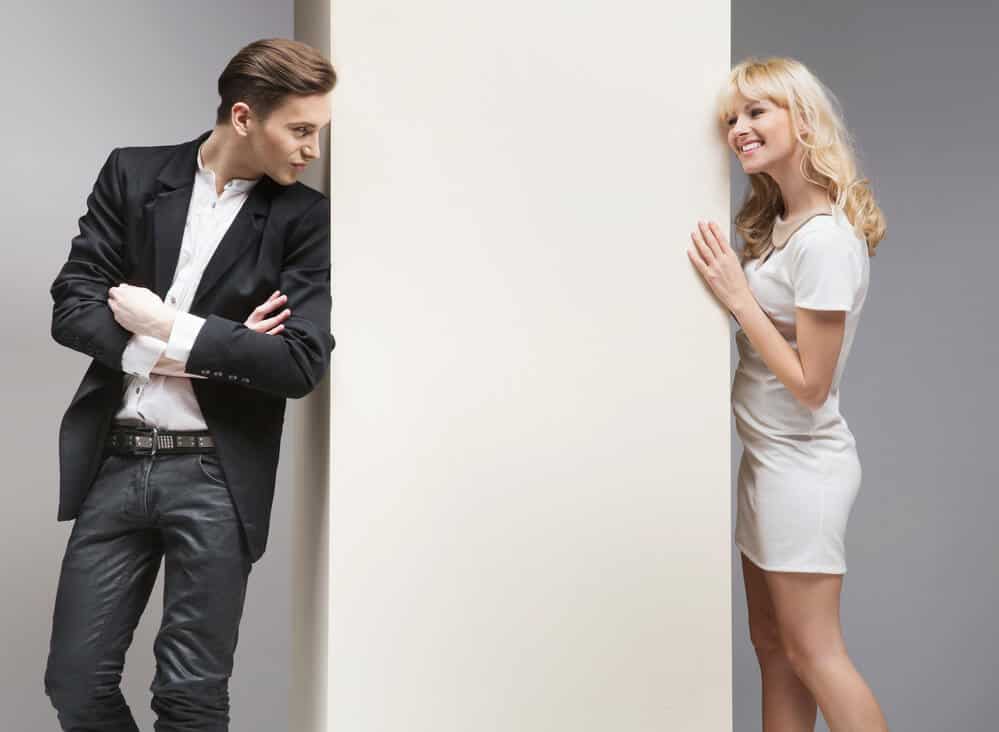 In fact, most men I work with are downright scared to turn anything sexual out of fear of being creepy which I totally get. What most guys don’t understand is that the key to sexually charged conversations lies in being subtle. You have to say a lot while saying a little. When you’re just starting to talk to a girl, you can’t be super direct about your sexual intentions. Almost everything has to be implied or suggested.

If a girl has those negative thoughts and starts to question herself, that shame will almost always win out, no matter how much she liked you. The best way to overcome that shame is by making her feel progressively aroused. That means, you start small and subtle so that she starts to feel sexual without feeling it’s wrong. Instead of being overtly sexual and triggering shame, you ease into it basically.

Another reason why being subtle is important is that… if you’re too forward too fast… Women will think you’re attracted for the wrong reasons.

Look, we know physical looks attract men. But we also want to know that you’re excited by us specifically, and not just because of our appearance. We want to feel like our beauty may have sparked your interest, but our personality and connection with you is what continue to build your attraction.

If you’re acting super sexual from the beginning, a girl will think you’re only in it to get laid and see her as a target. So instead, you need gradually build up to more sexual stuff… as you get to know each other better.

Lastly, being subtle is also important because it shows you’re socially aware and experienced. If you’re completely overt from the get go, a woman might assume you’ve never had social interactions with other women and you lack experience. That you’re just some guy throwing himself at her without any idea of what a good flirtatious conversation should be like.

Now, at this point, you may understand why it’s important to be subtle and avoid the overtly sexual stuff. But I wanna get more granular so that there’s no room for error.I don’t wanna leave anything to chance. So I’m gonna give you the 4 basic types of flirting mistakes you need to avoid. These are things you absolutely should NOT do when you flirt with a woman.

As I said, a sexual connection must grow gradually. Your flirting together must start by being implied in innuendo, understood through wordplay, or as playful banter. Being blunt or heavy-handed can feel crude.

So instead of saying something like… “That outfit is so sexy. You’re turning me on so much right now..”

You could glance at her outfit and say… “Wow, It’s getting a little hot in here”.

Both those lines convey the same message essentially. But the first one is too direct. Whereas the second one is more subtle and suggestive, and would almost always be better received by a woman.

This is mistake guys make when talking to girls in their social circle or workplace. Basically someone they’ve known for a while. Professing such strong feelings to a female acquaintance or coworker is overwhelming and awkward. She hasn’t felt that same attraction yet. 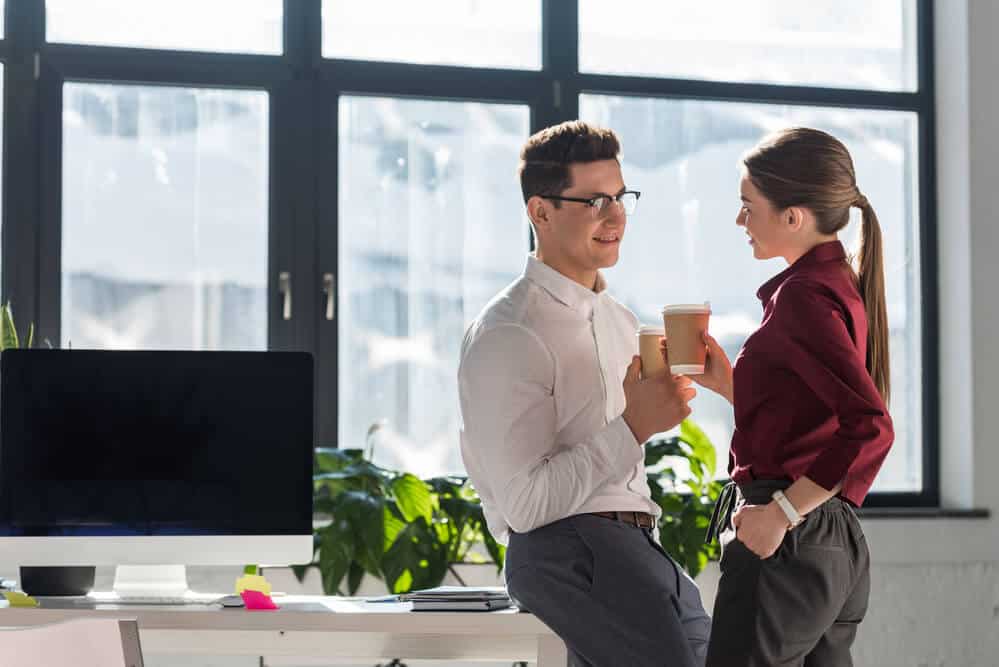 It’s much better to talk about attractions at the moment which I will describe later.

For now, don’t say stuff like: “I’ve wanted you for months”

Or… “I’ve been having dirty dreams about you so often”

This topic can only be discussed once you’ve had sex with her or at least sexted with her.

Look, I’m not even gonna explain this one. If a woman ever wants to see a picture of your junk, let her ask for it. Until then there’s absolutely no reason to send that picture. It’s not flirty, not sexy, and not gonna do you any favors.

And on that note, I wanna move on to what will be favorable. Now that you know what NOT to do when flirting with a woman… Let’s discuss what tactics actually work. And there are 6 easy and effective flirting tactics that I wanna share with you right now.

These are all proven to work like magic, so read carefully.

Flipping the script means accusing the girl of flirting with you or having a dirty mind. Everybody has a sexual side. In the right context and when we’re comfortable, it’s fun to be “naughty”. It feels exciting. So when she’s challenging or complimenting you, imply that you know she has more sinister intentions.

So for example, you could say things like… “Look at you trying to flirt with me. So adorable…”

Or… “Do you say this to every cute guy you meet?”

This can open up flirting really fast and be a fun game to play. If she likes it, she may reply one of two ways: She can run with it and say something like, “Oh no, you got me.”

Or she can pretend to deny it and say something like, “What? No way. I’m just a nice, innocent girl from the South. I don’t do stuff like this”

This is a simple and powerful tactic. What you have to do here is misinterpret what she was saying for something sexual or poke fun at her word choice. In other words, you take her words and pretend like she was saying something more explicit.

While accusing her of thinking dirty implies that she was intentional about it, this is more about her accidentally using more sexual language. Pretend like she was saying something more flirtatious even when she wasn’t. Tease her about saying something that could be seen as sexual. 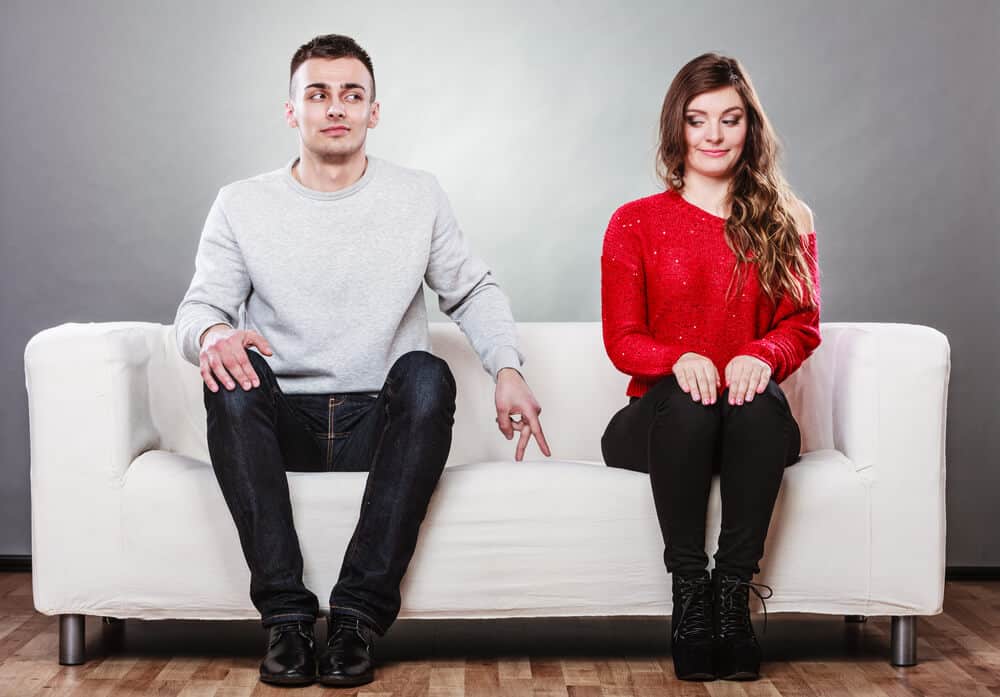 You want her to get into a playful denial about what she was saying or trying to explain herself.

Some examples of this tactic would be… “I know what a ‘pillow fight’ really means. You can’t fool me”

“Hmm, so you like strawberry flavoured stuff. I see what you mean”.

Or… let’s assume she recommends you a show on Netflix, and you respond by saying…

“Listen, I don’t have the time to Netflix and Chill with you this week. Maybe next week, okay?”

This tactic takes a little bit of practice. But if you’re present in the moment, you’ll find many opportunities to purposefully misinterpret her words.

It’s generally better to compliment a woman based on her personality rather than her looks. But that said, a more specific or unique compliment on appearance can work well. It helps to reiterate that you find that quality attractive in her or in general with women.
You can use words like sexy, cute, or feisty. Or you can playfully state that she is making you flustered.

Here are some examples.

As you can see, this one’s pretty easy. And women absolutely love it.

While talking about how you’ve been fantasizing about her for weeks can be terrifying, suggesting that you’re thinking naughty thoughts in the moment can be quite a bold turn-on. But again, you want it to be subtle. And you only wanna use this tactic after she’s responding well to some light physical contact or suggestive flirting.

Some examples of this tactic would be saying things like…

In simple words, you’re basically telling that that you’re currently thinking of her in a sexual way or that you’re turned on by her… but you do it in a subtle manner.

By being able to discuss those things in a fun, positive way, you’ll reinforce that she experiences good emotions with you. She feels like you have a healthy view on sex and aren’t judgmental – which only makes her further consider getting intimate with you. Your initial questions should be less personal and easier for her to answer. 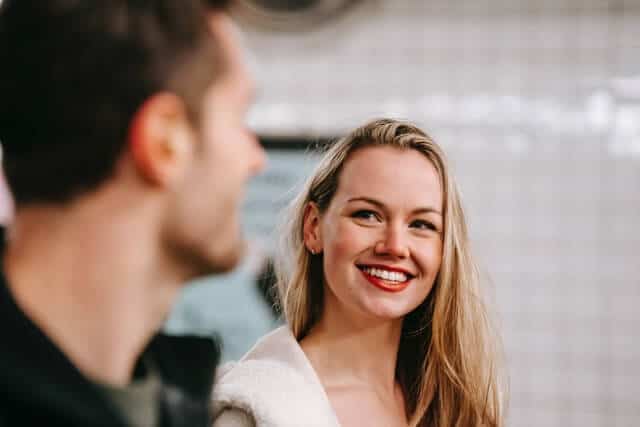 As long as she’s continuing to be vulnerable with you, you can get more intimate with your inquiries. So you can start with questions like…

You see, it’s a gradual escalation. You climb the ladder slowly. And you make sure she’s comfortable at each step of the way. And that’s it.

That’s how you turn women on with your words. You may feel like it’ll take time to get good at using these methods of flirting…

But my flagship program, which is called The F Formula, can help you download these tactics and many other proven flirting techniques, right into your brain, within a couple of days.

It gives you a simple step-by-step approach to master the art of flirting… and makes it so easy for you… that you don’t even have to think about it.

In other words, The F Formula makes you a natural flirt, so you can talk to women and build attraction without even trying. If that sounds interesting, check out the F Formula.

It has already helped 1000s of guys from around the globe attract, date and sleep with the women they want. And there’s no reason why it can’t do the same for you. You simply follow the steps outlined in the program and you’ll find yourself flirting with women – effortlessly.
You won’t have to worry about what to say and what not to say…

Once you know the F Formula all the guesswork is removed from flirting. You simply follow the formula and the attraction builds on its own. You really have to try it to see it. If you’re tired of not getting the women you want and you refuse to settle for less… I’d recommend you check it out.