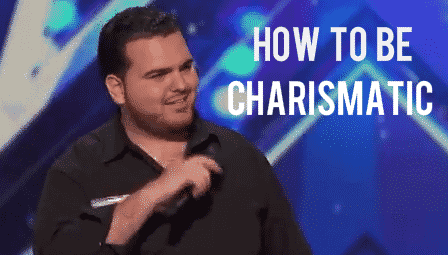 There’s nothing quite so universally attractive as a man with charisma.

A man who can walk into a room and command attention by his sheer presence alone.

As women we feel an automatic pull to men who exhibit this incredibly attractive trait.

And we can instantly recognize it when we see it.

However, it’s often hard to describe exactly what charisma looks like.

So rather than try to explain it to you, I thought I’d simply show you.

A couple of weeks ago I was lounging back at home watching one of my favorite TV shows, America’s Got Talent.

And there was one performer in particular who really stole the show.

Notice, he's not good looking. He's not fit. He's not successful. Yet, he owns the stage and wins over both the audience and guest very easily.

Check out the clip below:

This is a man who oozes charisma from every pore of his being.

From the moment he opens his mouth and introduces himself it’s clear that he owns that stage.

He has complete confidence in who he is and what he’s there to do, and nothing or nobody would be able to persuade him otherwise.

This is a man who knows himself to the very core. His self-belief is unshakable.

And this kind of attitude, this aura, is infectious. It’s obvious that the judges are drawn to him right away.

Yet this isn’t the only thing that makes him so charismatic.

There’s plenty of people who have a similar level of confidence but come across as obnoxious or conceited.

Being charismatic isn’t just about having a high opinion of yourself. It’s also about making other people feel good about themselves too.

Notice the way he flirts with the two female judges. It’s done in good humor with strong eye contact and a smile. He’s having fun while at the same time making them feel special.

And with the male judges he’s sincere, respectful and charming. They can’t help but be won over by the sheer weight of his charisma, as is the entire studio audience.

Now, was he the most talented singer on the entire show? Probably not.

Yet that didn’t stop Heidi Klum from giving him the ‘golden buzzer’ award to send him straight through to the final rounds.

Why would she do this if he wasn’t the best singer?

Because she wasn’t acting on logic.

She was acting on EMOTION!!

Charismatic people make others FEEL something.

And here she is, one of the most beautiful women in the world, swept up in the emotion he made her feel. She’s being influenced into action because she’s drawn to his charismatic energy.

If I could only ever get one thing through to you about women, it’s that we thrive on feeling emotions.

This is why you could be the greatest guy in the world on paper, but if you don’t make us feel something for you, nothing is ever gonna happen.

Your personality is the single greatest asset you have at your disposal to attract and date the women of your dreams.

If you’ve convinced yourself you need to be a male supermodel to date beautiful women, take another look at that contestant owning the stage.

He’s hardly going to be gracing the cover of the next GQ magazine. And he looks like he spends more time inside a pizza box than his local gym.

But does he seem like he’d struggle to attract women? It’s highly doubtful.

Would myself and a few of my Wing Girls date him or even sleep with him???  Apparently 5 out of 7 said YES.

That kind of confidence and charisma is intoxicating for women. We can’t get enough of it.

And that’s good news for you, because this is a learnable skill. I’ve helped countless men transform themselves from shy wallflowers who women ignore, into charismatic badasses that women flock to.

Are you ready to make that transformation?

Do you want to finally unleash the charismatic man you’ve kept locked away inside for so long?

Click here to read more and  discover how I’ll help you achieve this with Become a Man Women Want: Secrets of Attracting and Getting a Girl.