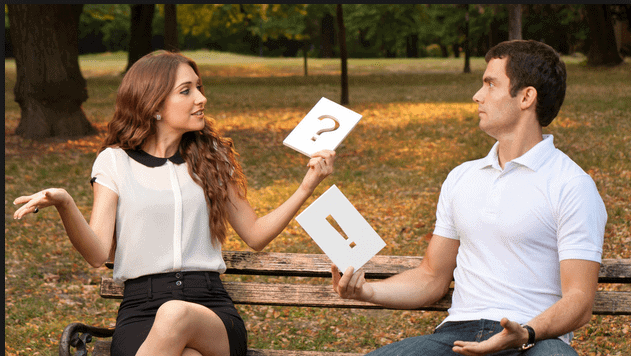 I'm about to share exclusive secrets about women and how they test men.  Women don't test men for the reasons men think. Here's the female POV on how to tell if she's testing you. Read on…

There’s one idea that a lot of male dating coaches promote that really bugs the hell out of me.

Know what it is?

It’s the notion that every sign of disinterest a woman shows you is simply a test.

“Sorry, I have a boyfriend…”

“I just don’t think of you in THAT way…”

“I need to go now and get back to my friends…”

There are dozens of examples like these, to which those coaches will give you the same reply:

Or at least, not always.

Confused? You should be.  It's damn confusing to decipher and decode what's going on and how to tell if she's testing you.

When you’re trying to work out if a woman is interested, HOW she says something is more important than WHAT she says…

And this includes all of her body language and nonverbal communication as well.

This is the subtext of an interaction, and understanding it is a crucial part of successfully flirting with women.

You’re talking to a cute girl at a bar.

She answers your questions with short replies, never asking you any questions in return.

Her eyes keep darting around the room, not giving you her full attention.

If you try to move closer to her, she takes a step back.

But hey, she’s at least TALKING to you, and she is cute… so you ask her for her number.

“I have a boyfriend,” she replies coldly.

Do you think she’s testing you here?

And she’ll wonder why you’re so clueless that you can’t pick up on that.

But now let’s imagine you’re talking to the same girl.

This time, she’s fully engaged in the conversation…

Laughing at what you have to say, asking you questions…

Finding reasons to touch you, or playfully hitting you…

Moving closer to you and whispering into your ear, grazing her cheek softly against yours.

You ask for her number, and again, she says she has a boyfriend…

But this time she pauses before saying it, bites her lower lip seductively while looking into your eyes, then lowering her gaze to the ground.

The subtext here is completely different than in the first example.

And by mentioning her boyfriend, she’s telling you she’s not available for dating or a relationship…

But there’s a pretty strong chance she’s open to going home with you that night (whether you want to sleep with girls who are seeing another guy is a completely different topic.)

So here’s the point I want you to understand:

It’s that we’re always communicating to you on a number of channels, based on how we FEEL about you in that moment.

But because most men don’t know how to properly flirt, they never make women feel anything.

And it’s the same kind of boring conversation that we’ll have with dozens of other guys who are also trying to pick us up.

And that something is flirting with us in the way that we want to be flirted with.

When you really understand this secret female language of flirting, women flock to you like crazy…

It’s why guys like in that example above even have women with boyfriends wanting to have sex with them, even if it’s only for one night.

Flirting is THE KEY to creating attraction in women, and once you master it…

You can create attraction in virtually any woman you want like clockwork.

It’s actually really easy to do, once you understand how women naturally flirt.

And it’s why you need to learn this from a woman, because the way we flirt and communicate is SOOOO different from how men do.

Without this knowledge and skill, it’s basically a crapshoot every time you talk to a woman…

Instead of you having the POWER to spark that feeling of attraction and sexual desire inside of her.

That’s why I created the definitive guide to flirting, which will turn any man into a flirting master no matter where he’s starting from…

Click here to discover how my revolutionary “F-Formula” program will give you the power to flirt and attract women at will.