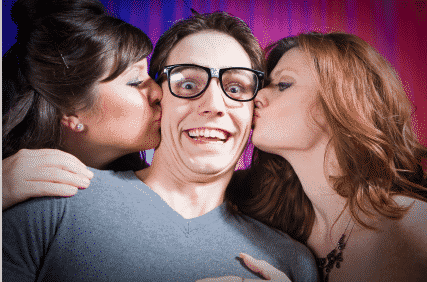 Did you know that being nerdy is now the in thing??  Well, it's true.  Maybe it's because of that show The Big Bang Theory, but women are now totally turned on and attracted to nerdy men.

I thought this article on How Nerds Can Get Girls was awesome and wanted to share it with you.  My comments are at the end:

How Nerds Can Get Girls
By: Sebastian from www.globalseducer.com

Are you a lonely nerd? In case you are one of the few nerds left that are not disguised hipsters, you don’t have to be ashamed about it. I can confidently say that I am one of the biggest nerds on the planet. I might not wear glasses that are bigger than my head, but I love Star Wars and everything that is somehow related to Science Fiction. I even finished my Master of Science with a first class honors degree.

I have never been in any sports club and if you would put me on an American football field I wouldn’t survive the first three seconds. Nevertheless, I am extremely successful with women and at the moment I am in a relationship with the most wonderful girl you can imagine.

How is this possible?

Well, I chose another path than most nerds choose. Whenever I talk to fellow nerds about dating related topics they always tell me how much they want to stop being nerds and start to be the cool guys who get the girls.

I love to look at their baffled faces whenever I tell them that the best they can do to get girls is to celebrate the fact that they are nerds. You can’t and you shouldn’t abandon your personality just because you think that this is what holds you back from attracting your dream girl.

The truth is that being a nerd doesn’t hold you back. The only thing that holds you back is the misbelief that girls don’t like nerds. Let’s debunk this myth once and for all.

All guys who get the hot girls are assholes and jerks, right? Sorry, but this is not true. There is a popular misbelief among nerds who never had success with women that they need to become complete assholes in order to attract amazing girls into their life.

About two years ago I thought the same. I always saw those incredibly beautiful girls who ended up dating complete idiots. However, the more I learned about women, the more I realized that they don’t date those guys because they are assholes, but because they have certain characteristics that you don’t show.

No emotionally healthy woman wants to date a guy who treats her bad and no intelligent woman wants to end up in a relationship with a guy who is dumb as bread. The reason why they date those guys is because those men are confident, honest and because they are the only guys who have the balls to approach women.

You don’t have to become an asshole. All you have to do is to gain the confidence to approach women. I talked to a lot of my female friends about this topic and most of them told me that they would date a nerd. The only problem girls have is that they never meet one, because the typical nerd is too afraid to approach them.

What if you are attracted to a girl who doesn’t even know the difference between Star Wars and Star Trek?

That’s also no problem. As long as she gets the feeling that you are a passionate guy, it doesn’t really matter if she shares this passion. Girls are instinctively attracted to guys who are passionate about something. The number one reason why successful men are so attractive to women is because they are passionate about what they do.

All you have to do in order to communicate to a woman that being in a relationship with you will be a passionate experience is to show her that you are a passionate man.

Think About the Girls You Want to Attract

If you read one science book per day and your favorite video game is World of Warcraft you should think about what kind of girls you want to attract into your life. I know how tempting it can be when you see one of those hot girls who wear more makeup than a drag queen, but do you really want to date those girls?

Especially nerds who have no experience with women would nearly do everything to show all the people who ever made fun of them how awesome they are. I know from my own experience that dating a girl just to brag with her will eventually backfire.

Besides not dating women for bragging purposes, you should also think about what women you really want. Don’t sell yourself short. Imagine how your life would look like if you would have a girlfriend who has never read a book in her life.

Back in the days when I was completely unsuccessful with women I thought that no girl would ever want to date a guy who considers Luke Skywalker as his childhood hero. Guess which movie I watched last weekend with my girlfriend?

Not all girls on this planet live for their fingernails and Miley Cyrus. If you stay true to your nerdy side you will eventually attracted the girls into your life who love you for being the nerd you are.

Marni's Comments:  I love this article because it's so in line with everything I teach at The Wing Girl Method.  The key points to take away from this article are that no matter what kind of “type” of guy you are, you gotta own it. Be happy about it and not be afraid that being that type of guy is going to turn women off.

Men who own who they are, get girls.

Want to know how to approach and talk to women?  Then click here to check out my program How To Become A Man Women Want and I'll teach you how to use your nerdiness to your benefit 😉

True. When I play onstage i see girls hooting when I finish my song.