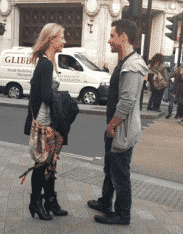 If you've been reading my blog, watching my instant download programs OR listening to my podcast, you know that I am NOT a fan of canned lines and openers.  WHY?  Because as a woman, I know it's about WHAT  you say, not how you say it.

But I also know that everyone needs training wheels to hone a new skill, which is why I asked my awesome Wing Girl Alex to provide her advice on opening lines that work.  Alex is super cute, SINGLE and awesome.

Not only does Alex share what lines do and do not work on girls like her… She has also provided a description of what she calls “The Dive In Method” for starting conversation that works best on her.  (NOTE: I've been teaching the Dive In Method for years but I call it OSA)

Opening Lines That Work & An Introduction To The Dive In-Opening Line
By: Alex

This weekend I matched with someone on Tinder. Exciting, right? Wrong. Soon after matching with this guy, he messaged me this opening line:

What did that even mean? It sounded like a sexual come on gone bad because of auto correct.  I think he meant to say, “I spank you like a horse.” Or maybe, “in horse” is a sex position? All I know is that it sounds degrading. Why did he think that was appropriate to say to a total stranger?

I texted my best friend and told her about this Tinder nightmare. She laughed and said, “Give him a chance.” To which I replied, “No.”

She texted back, “Maybe that’s the best opening line he could come up with?”

“’Hello’ is a pretty simple opening line. Not a chance of me writing back.” I said.

Sorry, I know you wish I was this awesome girl who just gave 2nd and 3rd and 4th chances to creepsters, even if they are not meaning to be creepsters… but I don't.  And neither do most real women.

Later, I got to thinking about this and about all the opening lines that I have received over the years, which ones worked and which ones didn’t.

I think by now, I have heard it all.

I’ve had guys be really mean in their opening lines and say things like:

Guy–“So you and your friends are too good to talk to me?”

This was the first thing he had said to us… We haven’t even been given a chance to talk to you.

I was just walking down the street… Am I supposed to smile all the time?

How is my posture conveying that? And why do I feel like I’m in third grade and he's the boy on the playground pushing me down and then later trying to kiss me on the cheek?

I'm a pretty happy girl, in fact people make fun of me for it.  But isn't it interesting how my initial gut reaction to these opening lines were anger, frustration and the strong desire to punch something??

Probably one of the most common opening lines that I get is, “Hey, what are you?” I’m half Mexican American, half white, but my facial features make it very difficult to tell what my ethnicity or race is, so people love guessing about my cultural background. However, opening with, “What are you,” isn’t a great line. To me, it sounds kind of rude. “What are you” sounds as if you are asking me for some kind of classification or my species. “Um…human?” Though, it is a legitimate question so save it for five minutes into a conversation and bring it up like this: “You’re look is so interesting. What’s your racial and ethnic background?”

Pick up lines are the worst, too.

“Did what hurt?” replies Woman.

“When you fell from Heaven,” Man said with a smile.

Can we retire this line already?

I don’t recommend pick-up lines. Nothing about them are cute, sexy, or attractive. As women, we’ve heard them all. They’re not flattering. We know you’ve used them a billion times on other women. They don’t make us feel special or excited to know you. Rather, they make us look for the quickest exit away from you.

UNLESS executed correctly. And when I say correctly, what I really mean is him making it very clear that he knows he is using a classic “pick up line” and is ironically using it OR playfully using it and then calling it out.

For example, I have to give props to this guy who approached me a few months ago with the best pick-up line ever. As I was walking by, he had this confused look on his face as if he was trying to figure out who I was. So I looked at him a little closer. Did I know him?

He stopped me and said, “Hey, didn’t I match with you on Tinder?”

“I don’t think so?” At this point, I’m racking my brain trying to remember. Did we match? I don’t recall him on Tinder. He didn’t exactly look like the kind of guy I would swipe right on.

“What’s your name again?” he asked me.

I’m still confused. I can’t remember this guy at all. “What’s your name?” I ask.

He gives me his name and then laughs. “I’m just messing with you. We didn’t match on Tinder.”

I was completely blown away. First, his acting was amazing. Secondly, that was the most creative opening line that I’ve ever heard. And if my friends hadn’t pulled me along, I might have stayed and chatted with him because I can respect a guy with creativity.

For the most part, “Hello” is not the best opening line either (though it’s not really bad either). If I’m walking by and a guy says, “Hello,” I’ll usually say, “Hi!” then smile, and continue walking because the guy just left it at “hello,” and didn’t say anything else. I’ve seen my friends do the same thing. I think as women we feel uncomfortable when a guy just says “hello” and leaves it up to us to continue the conversation. We don’t usually start conversations with guys, so we don’t know what to do or say which isn’t fair to men, but I can’t help that.

When a guy begins with “Hello,” I have a pretty good idea where the conversation is going—toward awkwardness. No one likes the awkward aspect of introducing oneself and “Hello” is the kind of opening that makes me have to do that. When a guy says, “hello,” I know that he will soon say, “What’s your name?” and then we have to exchange names. Then he will probably ask me what kind of work I do and then I have to ask him what he does. That conversation is as awkward as a fifteen-year-old boy trying to unsnap a girl’s bra for the first time. Let’s spice it up!

I like when a guy starts talking to me like we are old friends or as if they are talking to a guy friend at a sports bar. Skip the awkwardness and comment on something that is going on around us so we can start a conversation, get to laughing, or bond over something we see. How about using an opening line like, “Hey, what are you drinking” or “The bartender takes forever here.” Then five minutes later we can introduce ourselves and it will be less awkward because by then I will feel comfortable around you and will be willing to give you my name and learn yours. Let’s call this the dive in-opening line.

Other examples of dive in-opening lines may be:

“Ever wonder why Starbucks employees always spell our names wrong?”

“Is that Apple watch worth it?”

“You really wear that short haircut well. Too many girls are afraid to rock a cut like that.”

“Know of any good bars near here?”

“This music is giving me flashbacks to my grunge phase.”

As you can see, dive in-opening lines don’t have to be funny. They can be, but most of all they should feel natural and comfortable when you say them. Use your environment when coming up with a dive-in opening line. This shouldn’t be something that you have to think too hard about. Just relax and chat.

Fourth, this dive in-opening line makes us relax and feel less up tight. We hate turning down guys, hurting their feelings, or being pessimistic about a man’s approach toward us. I know it may not seem like that, but most women feel this way. Starting a conversation with a woman like you two are old friends will help her relax and make her more willing to speak to you. And the longer you can get her to speak to you, the better because it raises your chances of getting her number.

So skip the awkwardness, lose the pick-up lines, and drop “Hello” from your dating dictionary, and dive right into a conversation with me.

Would love to hear what you think of the Dive In Opening Line. Write your comments below.