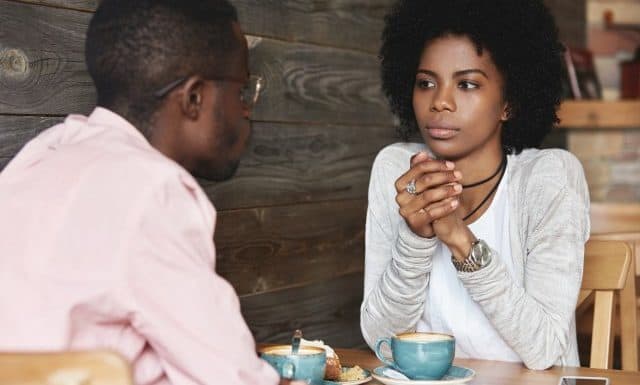 Just how honest should you be with a woman you just started dating? You don't want to reveal too little, because you run the risk of her not being able to emotionally connect with you. But if you go into TMI territory, you could scare her off by telling her things about yourself that are not only too personal to share so early on, but that are actually unnecessary. Read on to learn where the line is and how NOT to cross it…

One thing I love about my readers is most of them want to be open and honest with women. Unlike a lot of guys, they’re not interested in lying or twisting the truth just to try and get a woman into bed. And while that’s great, it does present another problem:

When do you cross the line from being open and honest… To sharing too much information (TMI) too soon that you risk scaring her away?

It can be a tricky terrain to navigate, and one that my students often ask me about. So I wanted to give you some guidelines on this here to help clear it up. Notice I said guidelines, because there are no hard and fast rules about this. But to give you an example, let’s take a situation where a student recently asked me about.

He had some struggles earlier in life, dealing with depression and even a suicide attempt. And while he’d worked hard to put those demons behind him, he felt it was important to share with women on a first date — so as not to be keeping anything from them.

Now, here’s my take on this:

Yes, this was a huge part of his life. But it’s not something that he’s currently struggling with, and it’s also deeply personal. It’s not the type of thing that you rush to tell people when you first meet them. Instead, it’s the type of thing you’d share with someone who you have a closer relationship with.

Also, choosing not to bring up a subject is different to lying about it. If a woman directly asked him, “Have you ever gone through depression or a suicide attempt” then I’d suggest being honest about it. (Although it’s highly unlikely anyone would ever ask this on a first date.)

When would be the right time to reveal this? There’s no definitive answer e.g. on the 4th date, or after one month etc. It’s more about when the time feels right. And that would usually be when you feel like there’s something between you that could be going somewhere. In other words, if you just have a casual sex relationship, it’s really not important to share.

But if you can see it being a real relationship with a future, you’ll want to get it out on the table… and at a point before she feels like you were deliberately hiding it. However, because something like this IS so personal, most women will be totally understanding that you didn’t share it right away.

A good rule of thumb is the more she’s sharing deep and personal aspects of her life, you want to do the same. Now, there’s a big difference sharing TMI and some of the things that men don’t come clean about on the first date.

I’m not saying you should just hide everything about yourself that you’d rather keep private.

For example, if you’re married or in another relationship, that’s a pretty big deal. Not telling a woman deprives her of the right to make up her own mind about you based on something incredibly important.

Similarly, if you’re only in town for a week on business, that’s the kind of thing you want to be upfront about. Same goes for having kids, being unemployed or something else currently in your life of great importance. Hopefully you can see the difference here between basic info about your life that people typically share with everyone…

Versus private details about your life that would seem like TMI to share with someone you’ve only just met. So if there’s something important she needs to know, go ahead and share it.

Now, I understand some guys won’t share these things because they think we won’t like you if we know the full story. In some cases (such as you being married), that could be true. But most of the time, when you simply come from a place of being open, honest and unapologetic about who you are… we’ll love you for it.

This is a key component of being the man women love, and it’s what I show you how to do in this top-rated program.

You won’t have to sweat the small stuff, or worry about what to say and what not to. Instead you’ll just naturally attract and connect with women by being your authentic self… the REAL YOU that has value because no other man can offer it.

This way of being around women is life-changing, and it’s yours for the taking when you click here and choose it.