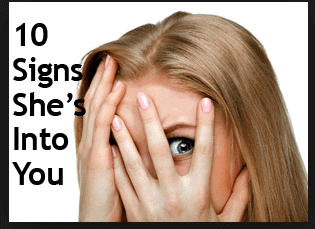 Before making any moves on a girl please read this. It will help you decipher the signs she likes you and signs she doesn't.

I get that in today’s “Harvey Weinstein” climate, you want to be extra cautious before you make any moves.

But if you’re goal is simply to ask a girl out or for her number… and not asking her to get in the shower with you, to ensure her role in the hangover part 4, you’re pretty safe.

I have clients who waste half their lives decoding female signals so that they can avoid any type of rejection or embarrassment.

In the time it can take to go through and decode all her signals to make sure they line up and point to “yes ask me out” you could have flirted and connected to 10 more women. Maybe more.

If you googled “sign's she's into me” you would get 1000's of articles that all list the exact same signs… and these signs are good signs to look for.  But what these lists don't give you is context.

I’m going to share a little story with you about a guy I used to work with that I had the biggest crush on, what I would do to signal to him that I was open and ready for him to make a move and ask me out.

I remember when I first met, let’s call him Bill….  Actually, his name is Geoff and he’s married now so I’m sure he’s not watching this video.

So Geoff and I were working on a film shoot together.  Geoff was about 5 foot 8, had a big scruffy beard, wasn’t the best dresser but had some style.  He was super funny even though he was a little shy.

He and I worked very closely together.  I remember meeting him and was immediately attracted to him and crushed on him hard.

I always wanted to be around him.  Not necessarily with him but in his vicinity and I made damn sure I was.

I would stand by him and make sure I always looked good. Not in the way I put myself together, although that mattered too, but more in my actions.

I would work really hard around him. I’d be talking to other people and try to be really friendly or funny…. Basically looking like I was a happy girl who was fun but could still kick ass with work.

I wanted him to see that others liked me, possibly wanted me.  I also wanted him to always see me so that I would not be out of his thoughts.

Doing what I do now, I know that is NOT the best tactic, but a typical female tactic non the less.

When he and I would interact with one another, my focus was on HIM.

I would look in his eyes, I would laugh at his jokes and if someone were to try to pull me away, I’d make up every excuse not to have to go.  Especially if I had him engaged with me.

I’d find silly reasons to start conversations with him.

I wanted him in my space.

I wanted to be around him and I wasn’t looking around at others.

If we ever talked about dating or relationships I would always describe the kind of guys I liked as someone similar to him.

I gave this guy constant attention for 2 weeks of my life AND THEN I got pissed.   Well not pissed but hurt.

Hurt that he didn’t take action and notice my ever so obvious female signs.

Which led to me to doing a 180 where I ignored him. Got uncomfortable around him and would pick fights with him whenever I could.  Stupid and childish yes, but it’s what I did.

Anyway, the whole thing ended horribly and after the shoot we never really talked again.

Cut to 3 years later, we ran into one another and in a drunken reveal I told him how I used to have the biggest crush on. To which he responded “OMG I was totally into you. I had no idea you liked me as well”.

And that is the wasted time I’m talking about.

I’m going to take partial blame for this because I know many of you will comment “Marni, why couldn’t you just say you liked him. Why is it always the mans responsibility to put himself out there first?”

And I hear you.

I don’t agree with you but I hear you.

AND  just a reminder, I’m not a wing girl for women helping them learn how to grow a pair 😉

I'm your Wing Girl.  A Wing Girl for men, helping them discover how they can become sexual leaders with women.  Yourself and other men will never sexually lead if they keep waiting for a woman to go first.

Anyway, back to my advice.

Throughout my story, I gave you tons of the subtle signs that women give to men that in their minds scream “ask me out already moron”.

I’ll quickly list them for you in case you weren’t paying attention:

Couple these with the basic, typical signs that you can find on any website like eye contact, biting lips, tossing hair, softer voice, slight touching and it was so clear that I was into him!!!!

Please do not be like Geoff. Do not be a time waster.  If you see any of these signs go for it.

You know what, Even better, don’t wait for any of these signs and pay attention to the one sign in your head that says “I like her. I’m going for it.”

Give her a chance to say No and reject you instead of you rejecting yourself.

If I find out that after reading this you are STILL wasting time, I’m going to come after you and force to you to just go for it.

Now go and get her AND if you need more help figuring how to approach her or how to talk with her OR how to spark attraction, then I can help with that.  I can tell you everything you need to do to attract, date, seduce and get the girl.