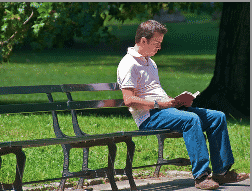 Tons of people believe that being introverted is the exact same thing as being shy.  These people tend to blame their introversion for the reason they are not meeting women, getting dates or progressing in their success with women.

I'm going to break all these introverts beliefs in about 30 seconds by revealing to them the difference between being introverted and being shy.  The two actually have nothing to do with one another. But I'll get to that in a second.

About a year ago I started getting emails from Richard.  Richard is an introvert and became really fascinated with how his introversion would affect his interactions with women.  From his fascination he started researching and finally wrote an article on the difference between being introverted and being shy and how to date as an introvert.

He sent it to me and I asked if I could share the article because I thought it would be really interesting and extremely motivating to those that are introverts and don't know how to use their quality as a super power.

His article is below.  Would LOVE to hear your thoughts on his article.  Please post your comments below:

The Difference Between Being Introverted and Being Shy – By Richard

A very common complaint that dating coaches hear is something like this. “The advice you give is all very well for outgoing, extroverted people but it doesn't work for a shy, introverted person like me!”

There is a world of difference between being shy and being introverted. One of these things you were born with, the other you learned; one you can change, the other you cannot. For me learning about this has made a massive positive impact on my life and my self image, and it's this that I would like to share with you here.

Let's talk about introversion first; what does it mean to be an introvert?

Introverts are a group that make up approximately 25% of the population, believe it or not. They are people who are most at home in what can best be described as low stimulation environments. If you are an introvert you will gravitate naturally toward quieter places and activities. You will find that you spend a lot of time inside your own head, and it's very easy for you to become completely absorbed by a solitary pursuit such as reading, playing computer games or doing something creative. Being around large groups of people, or in loud, crowded environments will wear you down very quickly and you will soon feel the need to withdraw to somewhere quieter.

On a genetic level your brain is, from birth, fundamentally wired up differently to an extrovert's. It's something that's as much an inherent part of who you are as your height, your eye color, or your sexual orientation. For the most part if you are an introvert you are always going to be an introvert and that's not a bad thing!

Being introverted does not necessarily mean that you are also shy though.

Shyness, as I define it, is firmly rooted in social anxiety. It's the manifestation of fear; you are acting the way you do for fear that something bad might happen. Maybe you are afraid of being embarrassed in front of others, worried what others might think of you, afraid you won't be accepted by them, maybe just trapped by the thought that you might not get what you want. Those of us who have and do suffer from shyness were not born with our shyness; we learned it from experiences during early life.

The reason that shyness often comes bundled up with introversion is that people who are introverted, because of their natural preferences for how to spend their time, tend to find learning and exercising those all important social skills more difficult.

I believe it is vitally important to drive a wedge between being shy and being introverted. Introverted men can be very attractive to women but as a man being shy is, frankly, a death sentence to your dating life.

How do you do this? Well, the first thing you have to do is accept that you are always going to need that time away inside your own head to keep yourself in balance. Don't punish yourself for not being able to go out and socialize every night of the week and if the relentless nightlife that the PUA movement are so obsessed with is just too much for you to cope with, if you don't enjoy it, just don't do it. There are other ways to be sociable and meet women.

Do not, though, ever use being introverted as an excuse for not acting on the things that you do want. There is no such thing as “I am too introverted to go and talk to her.” If you find that shyness is a problem you just need to look at yourself, figure out where you have skills missing and apply yourself to doing the things that will help you learn them.

Things like taking a dance class, joining a public speaking society, heck I even went through a phase of learning card tricks and practicing them on the nearest attractive women whenever I caught the train. Anything that makes the pit of your stomach twitch when you first think of it.

Learn to be just a little bit bold, but all the time, so that you are constantly growing your comfort zone.

As for your social life, having an active and vibrant social life makes meeting and attracting women a thousand times easier. It can seem overwhelming and awkward at first if you aren't used to meeting new people, but it is something you can get used to if you strike a healthy balance with your need for quiet time.

I think a lot of introverts believe that the only way to succeed socially is to beat the extroverts at their own game, but that couldn't be more wrong. Don't make the mistake of thinking that constantly and loudly talking at people is the only way to be accepted and valued as part of a group; as an introvert it is important to play to your strengths.

Such as: attention span and focus, your ability to plan and organize, and that you can listen and connect deeply in one-on-one conversation. Let the extroverts be the extroverts, love them for their energy, and give them the chance to appreciate you for your own set of gifts that you bring to the group.

The most valuable piece of advice I can offer to the social introvert is this: connect people.

Be the one who always introduces people to each other when you're with friends.

Be the one who gets everybody's photos together and shares them after any event.

Be the one who books the restaurant, or plans the holiday and bring people together that way.

If you take the lead in doing these things others will not hesitate to jump on board with limitless energy, do all the talking, and at the end of the day they will connect it all to you!

It only really takes minimal effort to do these things but if you keep doing them the cumulative effect over months and years is a wide and generous social network with you at the very center.

I do genuinely believe that introverted men make the best lovers. At our best we can be driven, focused, loyal and empathetic as well as being great leaders and listeners. We are also by our nature very deep and mysterious, such that nobody can every truly know everything about us.

These are all qualities that women long for in a partner, so if you are an introvert you owe it to them, and to yourself, to leave your shyness behind and share your gifts with the world.

The take away from what R has written is that being an introvert is not a negative. It's just an opposite to being an extrovert.  Both Introverts and Extroverts have their own unique qualities and if used correctly can truly be a man's super powers.

Let me know your thoughts on this article.

If you want to learn how to tap into the natural super powers of being an introvert that attract women CLICK HERE and watch this short video.