OMG, have I had an amazing month. I know I said I was taking time off (and I definitely did) but I also did some really great things that will benefit you 🙂

If you recall, this past weekend I was in NYC speaking at an event for 300 beautiful, single WOMEN!!! My NYC contest winner, Ron was also in attendance. Ron was awesome BTW. I taught him a new move that I call: Announcing The Elephant

More on that in a minute…

(I also got to be on ABC Radio and meet living legend Bill Diehl. Picture to the right.)

I have to be honest, I was freaked out before going there to speak at this event. One of the key reasons I can understand how you feel with women, is because I used to feel the same way around women. I used to be intimidated by pretty, popular girls. Which means I put them on pedestals, was wimpy around them and never spoke my mind. Instead I aimed to please them. Ugh!!!

I was so nervous to see how they would react to what I have been doing for the past decade. Giving away ALL their secrets to men. But they loved it!!! They wanted to hear everything I have now learned from the men I work with.

They wanted to know:

– What they are doing that turns you off

– What makes you not want to approach them

– What makes you not call after you have sex with them.

– How they should behave after a date with you (text, email, call)

Above all, they wanted to learn how to meet a good guy and what they could do to make it happen.

I had a 27 year woman, tell me that she lies about going to Yale because in the past, her schooling has intimidated men.

Another woman told me she doesn't understand why men don't approach her (BTW she was tall, blonde and soooooo pretty). I told her she scowls which she did not even realize. Then started smiling and she lit up the room.

Another woman asked me if it's wrong to sleep with a guy on a first date and if she does, will it mean she is considered un-dateable.

I was honestly attacked after I got off stage with question after question. Questions about you, MEN. Wanting to know how you worked so that
how to get back with your ex

they could get you. I was not shocked by these questions at all. Women are just as confused as you. In fact they're downright nervous and fearful of screwing things up.

As I mentioned before, I had my NYC contest winner Ron with me at the event. Ron was awesome! He's been studying my materials for some time now. It's always nice to hear that my work is having an impact. I wanted to share something that I shared with Ron. It's a move that I use on a daily basis that I call: 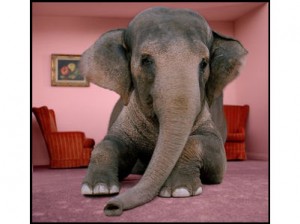 Announcing the elephant is when you literally say out loud what you are attempting to conceal or cover up. (Trying not to say)

So for example, when I got on stage to speak in front of the women I said “I'm so nervous. There are so many women”. This allowed me to no longer focus on trying to cover up/conceal that I nervous. Instead, I got to call out my Elephant!!!  Which helped me relax/focus and made the women feel more connected to me.

I advised Ron to use it when he is approaching women or even on dates with women.

If you approach a woman and forget what you want to say, you can look at her and confidently say with a smile “see what you did.  You made me all nervous and I forgot what I wanted to say.”  Gives you a few seconds to relax, breath and compose yourself.Stop wasting your energy trying to conceal that you are nervous. Just announce it!

If you are on a date with a woman you can confidently look her in the eye and say “you know what. I'm a little nervous right now.”

You Announce The Elephant and then move on! Just make sure you announce it confidently. (smirk, eye contact, body language) Announcing The Elephant can put you at ease instantly. It also can put a woman at ease.

So I want you to start Announcing The Elephant!!!!!

Tell women what is going on in that head instead of trying to cover it up.

Trust me, it will make connecting and being present a lot easier.

Overall, NYC and my month off was a huge success.

I got to relax (a little) and learn many more new things about women that I will be sharing with you soon.