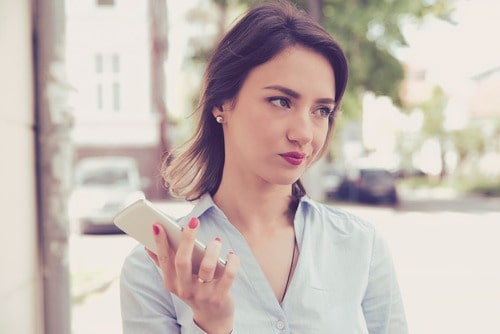 Marni's Wing Girl Method > Blog > How To Approach Women > What Does It Mean When She Ignores You?

Why does a woman go from acting friendly with you, to completely ignoring you in person and over text? Odds are, you misread her signals. Women communicate a lot with body language and non-verbal cues. Learn what to look for so you know whether or not to ask her out, and how to handle her behavior after the fact…

Nobody likes to be ignored. It feels even worse when the person ignoring you is someone you’re really attracted to. Yet as a man, it’s something that WILL happen to you as part of your dating life. And while it’s one thing if a woman ignores your initial approach (she could be busy, didn’t hear you etc.)…

What really stings — and confuses — is when a woman SEEMS into you, but then goes radio silent.

Recently, this happened to one of my students when he asked out his hairdresser. She was really friendly and talkative while cutting his hair. So he asked for her number to get to know her better, and she agreed. But after one lunch date months ago, they haven’t been out since… and most of the time she simply ignores his text messages.

Despite this, she still seems interested while cutting his hair and tells him to text her. So what gives? Why would a woman show any interest, only to pretend you don’t exist when you try and pursue something? While it could be due to a number of reasons, it usually boils down to this:

She’s not interested in you romantically or sexually, and thinks it’s easier to ignore you than tell you that straight up.

It could be she’s afraid you’ll get upset — possibly even violent. Or in this case it could be the woman didn’t want to risk losing a hairdressing client. And in some (rare) situations, it could be she just likes your attention so wants to string you along.

You can’t always determine why someone behaves the way they do… but sometimes they have their reasons for it. For example, if a woman dealt with a man turning violent after she rebuffed him, she would’ve learnt that doing so in future is a risk to her safety.

Now, I’m not here making excuses for women to show interest in guys and then ignore them. I wish everyone — men and women — would be more open and honest when it comes to dating. But the fact is, not everyone is perfect. This kind of thing is going to happen, whether we like it or not.

That means all you can do is worry about your own reaction to a situation like this, to avoid getting burned. In the case of my student, he let himself become frustrated and angry that she would behave this way.

Because in his mind, she was clearly saying she was interested with her WORDS…

But in reality, she was telling him she wasn’t interested with her ACTIONS.

And when it comes down to it, actions trump words every day of the week. So if you find yourself in a situation where you’re unsure if a woman is really interested or not… Ask yourself, what are her actions telling me? Because when we like you, we don’t ignore all your texts… We don’t keep finding excuses to avoid meeting you… Nor do we go out of our way to make things difficult for you.

So if a woman talks to you and is friendly — but ignores your attempts to meet up for a date — that says a lot. She’s trying to politely let you know she isn’t interested, without having to verbalize it (which could be embarrassing for you, her — or both!) To give you a woman’s perspective on this, it’s an issue we deal with regularly.

We meet a guy and have a pleasant conversation, then seemingly out of nowhere he asks us out. But it catches us by surprise, because we didn’t view his intentions in “that way”. We thought he was just being polite and friendly. What was missing?

Without proper flirting, it’s like trying to drive a car without any gas. It’s just not going to go anywhere. We need to feel that spark between us… that hint of sexual tension… and flirting is how you create it. Now, when I ask most men, they tell me they know how to flirt.

But when I have them demonstrate it, it’s clear their idea of flirting is WAAAY different to what women actually respond to. That means even if you’re reading this and you think your flirting skills are on point… they probably aren’t. It’s why I’m passionate about sharing my program F Formula with as many men as possible.

There’s literally nothing else on the market that teaches you how to flirt with women so easily, naturally, and effectively. If you can just get good at this ONE thing, it will transform your life with women almost overnight. Want more details? Click here to see everything you’ll get from this program. 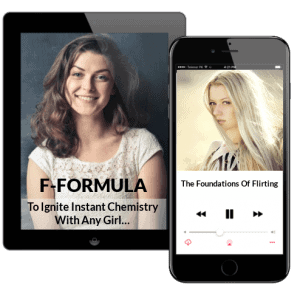