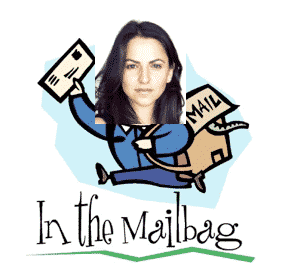 I've been getting floods of emails from guys who've been asking GREAT questions that I think you'd love to hear for yourself. And it seems I get the most over the weekend come Monday lol…

Sooooo…. I decided to send you the best questions and success stories every Monday and call it “Marni's Mailbag” 🙂

They're too good to not share with you… so take a  gander, see what applies to you, and let me know how else I can help!

“When Should A Guy Approach A Woman?”

Late last night, I went grocery shopping and saw this woman that I was extremely attracted to.

She was wearing biking gear and had a bike in the back of her truck. I think this intimidated me a little because I did not approach her. Reason being, I really thought I would be bothering her.  I do this all the time and want to stop wasting great opportunities.

So my question to you is, when can I approach a woman?

The short answer to your question is ALWAYS. If you see a woman you want, approach her. Delay or linger and you can easily become the creepy guy seemingly gawking from behind the Doritos display.

It sounds like there is a lot of pressure on your approaches and you may be thinking large picture instead of small picture.

Large Picture: I'm going to approach this girl, she is going to be attracted to me, I'm going to get her number, we are going to date, have sex… The whole shebang.

That's a lot to put on an approach.  Try drilling it back a little to a smaller picture.

Small picture (or intentions) are more realistic.  Plus, they are far less emotionally charged which makes them easier to accomplish.

Small Picture: That girl is cute, I want to talk to her and see if I like her.

Having the small picture in mind before any approaches will make it a lot easier on you. If you don't attach a large picture outcome to your actions, then you will not feel as much pressure to succeed.

So, again, start off small!

And once you're ready and you've got all the basics  down, THEN you can take your game a step further by really developing into the type of guy that can open up with a woman, fully engage her into a deeply flirtatious conversation, and illicit intense attraction from her on a genuine (and even sexual) level.

So please do not fall victim.  Approach every woman that peaks your interest at this point and decide what category you want to put her in after you have some facts to base it on 🙂

“You are the Tony Robbins of dating”

Recently, I bought both of your products: How to Become the Man Woman Want and What's Inside a Woman's Mind.

They are hot as fire, Marni.

I learned so much about how to connect with a woman that I felt empowered as if I had gone through a Tony Robbins event. In fact I'd say you ARE the Tony Robbins of dating!

All I can say is that I learned so much that my confidence has soared to the Alpha Level.

With this knowledge, I am able to approach confidently to a woman and create a meaningful relationship that can lead to marriage.

You know I can't believe I never saw myself as Tony Robbins… I mean we look almost IDENTICAL to each other! 😉

I'm kidding.  I'm so glad you were able to gain the confidence and charisma to be able to approach women and become a man who can create a meaningful relationship.

Your success is my success so please keep me in the loop and once again, it was an honor to have helped 🙂

“How Can I Tell She Likes Me?”

There is a girl at the place I work. Every time our eyes meet, she blushes. She has winked at me and she has checked me out. She has also looked at me when I enter the room. At the end of the day I say bye and she responds but she does not initiate anything.

A) What is she doing?

Answer to A:  She is living her life and being friendly to a co-worker.

If you are waiting for her to pounce on you it's not going to happen.  If you want something YOU have to go for it.  Especially when it comes to women.  Women, even successful women in business, still want to be feminine. They typically do not take the initiative to make the aggressive first move.

Subtle signs like winking or smiling could be saying to you “ask me out fool”.  They could also be saying “I have something in my eye.”.  It's up to you to find out more.  Right now you are playing it safe with her. You are taking little steps to “test” if she likes you but in reality you are actually just protecting yourself.

But protecting yourself and staying in the safe zone will almost never result in getting what you want.

There are actually SO MANY things that go on in woman's mind when she's into a guy… and yet there are so many things that us girls will NEVER say!

So imagine how things would be for you, if you knew exactly what was going on in her head… and EXACTLY what to say and do in order to have her gazing at you like you are the ONLY man for her.

See most guys actually get it wrong… they compliment her in ways that come off as offensive, touch her in ways that get her creeped out, and text her in a way that seems needy and unattractive.

And I don't EVER want that to happen to you!

So I put together a full arsenal of goodies that'll show you how to get her giggling and blushing at your touch, daydreaming about you while you're away, and even fighting herself to not text you because she desperately wants to hear from you already (yes this is how us girls act when we're REALLY into a guy!)

I call it “[What's Inside A Woman's Mind]” and I give you JUST THAT: everything you need to know about what we think… and more importantly… what we WANT when it comes to the perfect man.

Not only are you gonna the entire female perspective on our ideal date and dude… you're now gonna have the confidence to NEVER miss out on a girl you really like (especially your co-worker!)

As the famous Wayne Gretzky says, “You miss 100% of the shots you never take.” So start taking shots 😉

P.S. – Women can be very hard to read, especially in the workplace.  There're so many things we never say to begin with… so imagine all the things she won't say to you at work (or all the FEELINGS she actually does have for you).

Find out exactly what's going on in her mind and how you can use that to get her tonight!

Once you discover exactly what's going on in her mind, you'll have everything you need to win over her heart… no matter WHERE you are 🙂