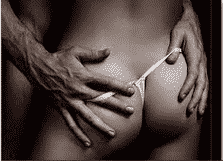 I have to tell you that, as a woman, there is NOTHING better than a man touching me in the right place, at the right time in just the right way…I want to share a story with you.

It's about this guy named M.  Hell, I'll just tell you his name cause I'm pretty sure he doesn't read my newsletters 🙂

I met Matt when I first moved to Los Angeles. He was part of my first “new to LA” friendship circle.Matt was a teacher. He also designed websites BUT I wasn't overly attracted to him. I mean he was cute but I wasn't into him.  To be honest, he kind of creeped me out sometimes.

This one night, we were all out as a group and Matt and I got into an interesting conversation about Archie comics.  I'm a HUGE collector of Archie comics and have about 3000 of them.

Anyway…  we started talking about Archie comics, a pretty un-sexy conversation… when suddenly Matt started touching the under side of my knee in this way that sent shivers up my spine.

As I had told you, I wasn't into Matt BUT I was into feeling good and whatever he was doing felt really freaking good.

We continue talking, he continues touching and yada yada yada…. we end up back at his place with my shirt off and him giving me the best massage I've ever had in my life.

I was literally in heaven with this guy that I was STILL not into… But whatever he was doing to me, I liked.I won't go into further details just in case Matt does read these newsletters… but let's just say I was open, ready for whatever he wanted to touch and eager to have him touch it.

Since being with Matt, I haven't met many men that could touch me the way that Matt touched me.  It wasn't that he touched anywhere new on body… it was the WAY he touched each spot on body.

Since that day I've always wondered what it was that creepy Matt did that no other man has been able to do since.

Now I'm not the expert on touching… hell I don't even know what creepy Matt did to make me feel that darn good.  But I do know someone that IS an expert who can tell you.

You see, I've been attending a lot of “interesting” conferences recently.

And at these conferences and I am making friends with some incredible people.One of the people I met is this guy from Chicago who is literally paid to touch women. He does this all day and is very good at it, and has many happy clients. And because he’s been doing this for so long he’s discovered a couple of very special places on a women’s body.

And if you touch these special places in a very specific way and order you can do to her what Matt did to me…and get her uncontrollably aroused.

So aroused that she has to act on those feelings, no matter where she is and who she’s with.

And the reason why this works is because us women work differently to men and for them touch plays a far bigger role in seduction.

Plus our bodies are more sensitive and receptive to touch.

You should know this already, if you’re not willing to touch a woman, there’s no way you’re going to sleep with her.

Which is why what this guy teaches works so effectively to get women attracted and turned on by just a simple touch.

Because of my new friend, I now know that what Matt did to me worked because it's based on how a woman's limbic system naturally works.

He wasn't doing anything magical or even that different from what other guys do… He simply knew what points to touch and how to touch them.Now you can too 😉

Click here now to watch this video to see how a very ordinary guy uses this system to get a girl completely turned on excited to be with him with just a simple touch.

Trust me, you'll thank me 😉