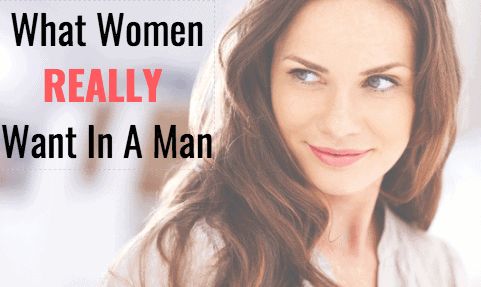 Sometimes what women SAY they want and what women really want in a man doesn't seem to line up. This article explains why we do this and why women aren't lying the way you think they are.

So I was having an interesting conversation with a new client the other day, and I felt it was worth sharing with you (because I'm sure you may be confused by this as well)

My client — let’s call him Tony — was telling me how he was totally confused by what women want because when he asked women what they want in a man they said one thing BUT if it was true, why weren't women flocking to him like sheep??

Here's what Tony said he thinks women want (based on what women are telling him):

“Marni, I think what women really want is a nice guy who will be their best friend.  A guy who isn’t too masculine and who will just treat her well and be supportive and have a great sense of humor. Is this true? It doesn't seem right because I'm just not getting lots of women. I'm nice. I'm a friend. A good listener. Caring and giving to women. I'm funny as hell. I don't shove my masculinity in their face or flaunt it. But still, nothing.”

I asked him why he believed that… secretly already knowing what his answer would be.

“Because that’s what women tell me they want,” he replied.

Now, chances are you’ve heard women say something similar about what they want in a man…

However, let me share the same truth with you that I told Tony.

But that’s not what turns us on or gets us excited.

We don’t sit around with our girlfriends talking about how hot it’d be to meet a guy who is nice and in touch with his feminine side.

And that’s because feminine women (the type you’re most likely attracted to) are drawn to masculine men.

Don’t misunderstand that though.

I’m NOT talking about outdated notions of masculinity such as getting into fights, drinking as much as possible, or having the biggest biceps in your gym. (Although truth be told, some women are into these types of guys.)

By masculinity, I’m talking about real men who value their own needs and desires and aren’t scared to go after what they want in life…

Guys who won’t tiptoe around us, afraid they might say the wrong thing and upset us.

I’m talking about men who let their true character and personality shine, instead of hiding it and pretending to be what they think women want.

Who know how to flirt and create sexual tension, and can move things in a sexual direction when they sense there’s a mutual attraction there.

It has nothing at all to do with being nice, toning down your masculinity, or talking to us like we’re a platonic friend.

So why is it that women tell Tony — and millions of men just like him — that’s what they want in a man?

Well, there are a few reasons, which I’ll highlight below.

For the most part, society hasn’t fully progressed to the stage where women can admit their sexual desires and turn-ons in the same way men can.

But instead talk about how they want a nice guy who treats them well who they can build a relationship with.

#2 We Want You To Figure Us Out

If we tell you exactly how to attract and seduce us, it’s not nearly as thrilling as you knowing this on your own.

We don’t want to have to tell you how to behave to turn us on, we just want you to be that guy already.

It’s exciting and refreshing when a man takes the lead, and knows what we really want without having to be told.

When we picture our perfect relationship, usually it’s with a guy who treats us well and is nice and supportive.

It’s just that we also picture that guy to be confident, masculine, and able to spark that feeling of sexual desire in us.

It’s just like how I’m sure you’d love to date a girl who is kind, caring, and treats you like a king…

Yet if she were morbidly obese you probably wouldn’t feel any gut-level attraction for her, thus wouldn’t be interested in a sexual relationship.

Here is the truth about what women SAY they want vs. what they really want and are desperately seeking.

When you ask most women what they want or what they'll respond to, their answers are given to you from the perspective of “I'm picturing a man that I'm already attracted to and want.”

Meaning, that they edit a lot of the stuff out that would be super important to you.  The things you really need to hear but women aren't thinking about it that way.

They already like the person they are picturing in their head. He's already got them hooked and they're excited about him.

That's why so often it seems like what women say they want doesn't line up with reality.

And the reality is that most often that attraction isn't there immediately and you have to work to create it.

Some people use their looks to create that instant attraction.

Some guys use their charisma and personality.

Some guys use their words.

And then once that attraction there, that's when the dream comes into play about who these women want that man to be.

After they're all butterflied up and excited about him, they desperately wish for him to be a good man who can be their best friend and together they can make others jealous of their love story.

And that's why women tell you this. Because it's true.

Now because you are awesome just like Tony.  And nice (not the bad nice but the good nice). And kind. And a good listener. And witty. And probably would make a great best friend.  You have the hard part down.

Do you know how many men have no idea how to do that other part? The part that makes women stick around and love them???

All that's left is to figure out is how to spark that attraction from the very beginning which is the easy part!!  AND it's where me and my Wing Girls come in 😉

We want to help your front end! haha.

Over the years, I've realized that the best way to learn is with others. Groups and teams help you learn faster and motivate you to achieve.  Doing things alone is no fun right?

I've called it The Team and it's run by my awesome Wing Girl Marissa.  She wrote the F Formula and is my best Wing Girl.

Anyway, I can blabber on about it or you can check out the group for yourself and see if you want to join it.  Be a member of our team!

To read more about The Team Click Here now.

Spots are limited at this time.  I may open up another group shortly.
I don't want a huge group or else you will just get lost in the mix.  So if you want a spot, go get it now 🙂

The Best Female Friend You'll Ever Have,

See this is absolutely correct, except you’re leaving out or diminishing something very important. First part is correct. Women don’t give a shit about all the things they say they do, because they attribute those attributes to men they already want to fuck. What you’re leaving out, is that women are far more shallow and picky then they’ll ever admit. Women find the vast majority of men unattractive, whereas men have much more variance in type and grade women’s attractiveness on a bell curve. Women do not. The difference between a woman leaving you on read, and a woman being… Read more »

Stop being friends with people because you are attracted. Only friend unattractive women. Do not friend women attracted to you if you are not attracted to them. Way too many people gave friends in hopes of creating attraction or just being their settling option when the clock runs out.