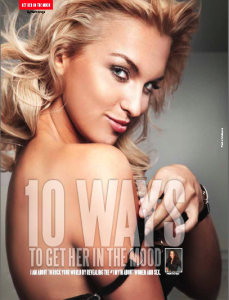 I am pretty sure I told you this already, but I write a column for Canada's top male publication, UMM. My articles are in every issue 🙂

Here's a piece I wrote called 10 Ways To Get Her In The Mood.

I am about to rock your world by revealing the #1 myth about women and sex.  Ready for it?

Women want sex just as much as men do, if not more than men. Women are sexual, sensual beasts waiting to be released by the RIGHT man in just the RIGHT way.

Here are 10 Ways To Get Her In The Mood whether you are dating, simply seducing or in a long-term relationship.

The #1 thing that blocks or stops women from enjoying a sexual/sensual experience is that thing on top of her shoulders. Her head. For women, sex is far more mental than physical. The more you help make a women feel accepted, attractive and safe during any sexual act, the more free she will be.  When you provide a safe space it allows a woman's mind to free itself of insecurities and actually enjoy being in the moment. If you ease her mind, you'll loosen her body!

** After reading this article – go watch my video on how to calm a woman's mind so that she will do whatever you want! Click Here

My nickname in high school was The Kissing Bandit, which was a fancy way of calling me a prude.

When I was 18, I went backpacking in Australia and safely kissed my way up the east coast. That is, until I met a guy who broke me out of my shell. I met him at a club, we went back to our hostel and started making out. Prude Marni kicked in. I clenched and got uncomfortable. He noticed my quick change in behavior and said to me “I want you to be comfortable. If I do anything that makes you nervous or uncomfortable, just slap my hand and I will stop immediately.” I can tell you there was no hand slapping that night and I quickly got rid of my childhood nickname.

#3 Tell Her EXACTLY What You Want.

It drives me wild when a man tells me exactly what he wants to do to me. It's exciting and sexy. Be a man, say exactly what you want, and you'll get to beat around the bush, but in a very different way 😉

#4 Pay Her A REAL Compliment, Not An Exaggerated One.

Give a woman a REAL compliment about her inner core rather than her exterior. Evolutionary psychologists show that women are programmed to be skeptical of what men say. It's their way of protecting themselves from manipulative men who don't want to commit to relationships. The more a compliment is tailored to that specific woman, the more intimate and effective it is says Tammy Nelson Ph.D.

Whether it's for a one-night stand or for a partner of 6 years, no woman wants to feel like she's a slut, a whore or a stupid female that's been used.  Make sure to treat every woman with respect. Be honest, don't manipulate and treat her like a lady.

Intelligence. Now this may just be me but I get a “hard on” for men who are uber intelligent. Not the arrogant ones who want to attempt to school me on how much they know. The ones that just seem to know about stuff and talk about it with confidence and authority.

I'm not talking about pulling her hair and telling her she smells. I'm talking about being covertly inappropriate while out in public. For example, while sitting across the table from friends, talking about politics, slide your fingers up her thigh and just around her underwear line. Do this for about 15 seconds and then remove your hand. Do a couple of these in a night and she'll attack you as soon as you walk in the door.

#8 Bring Out Your Inner Caveman.

Nothing puts me in the mood faster than when I can feel my man craving me. “Women love to feel the desire of a man they're into. Give your girl an unexpected, passionate kiss.  Grab her hair – gently – and run your hands through it as your lips lock.  And when dinners over, pick her up over your shoulder, carry her into the bedroom, and toss her onto the bed.  A little spank won't hurt along the way.” – Christian Hudson, The Social Man

Anticipation is one of the most amazing aphrodisiacs. Send her 3-4 texts throughout the day telling her what you are going to do to her in the evening. Tell her how hot she is, that she turns you on and then tell her you like it when she does X.  X is the thing that is unique to just her so that she knows your lines aren't canned.

One Note: Don't get offended if she does not respond right away or even at all.  Many women are not comfortable with this type of forwardness because they don't know how to respond. Just keep going. This shows her you are comfortable being sexual and she can be too!

I just got shivers writing this one. Nothing turns me on more than when a man slowly touches me all over my body. Starting with a light massage of my feet. Then working up the leg to the inner portion of my thighs. Moving on to caressing the sides of my belly and chest and ending by brushing my back and neck with his lips. Amazing!

In fact, there's an actual step-by-step way to touch a woman so that you can amplify her arousal with every single touch…

And if you get off course…it could INSTANTLY turn her off.

I wanna make sure you know EXACTLY how to push ALL her hot buttons…so that you not only get her “in the mood”…but you also get her ripping off your clothes, dragging you to bed, and screaming over the best sex of her LIFE 😉

I've created an unedited, uncensored, EXTREMELY DETAILED recording of myself and Darrah talking about what we want sexually from men.

Here are just a few things we cover: