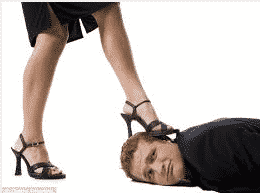 One thing I see over and over again are guys who insist on being nice to women.

They don’t want to be the bad boy/jerk/asshole that mistreats a girl or hurts her in any way.

Which would be great, except they’re not really being nice at all!

At least not according to a woman’s definition of a nice guy.

Not sure what that is?

Watch the video below to see how our version of a nice guy is drastically different to yours.

What most men consider ‘nice’, we consider doormat behavior.

And we don’t get aroused by men who let people walk all over them… even if that person is us!

So when you hear us say we want a nice guy, it’s true. We really do.

However, our idea of a nice guy is one who has a strong masculine presence.

A man who has opinions, beliefs and values, who won’t turn his back on those just to appease someone else.

So let’s take a look at a couple of examples of what most men consider to be nice behavior, that women interpret as you being a doormat.

Have you seen the movie Coming To America?

Eddie Murphy plays a prince of a fictional African nation, arranged to be married to a beautiful local woman.

Her whole life has been spent in preparation to marry him and do whatever it takes to make him happy.

So whenever he asks her opinion about something or what she likes, her answer is always the same: “I like whatever you like.”

While this is meant to please the prince, it has the opposite effect. He has no interest in her because he doesn’t want a servant, he wants a partner.

A woman who can be herself and express what she truly thinks and feels.

So while nice guys don’t directly say, “I like whatever you like,” that’s exactly what they communicate.

We can tell they’re not being their real selves around us because they don’t want to offend us by saying the wrong thing, or God forbid, disagreeing with anything we say.

That’s spineless, doormat behavior and it makes us feel like we can’t trust you to be honest about what you really think.

Our definition of a nice guy is one who will be himself, not pretend to be who he thinks we want.

One of my girlfriends used to date a guy who we nicknamed 7-11.

Because he was available 24/7 for any and all of her needs.

Needed a lift at 1 am when leaving the club? He’d drive on over.

Wanted someone to carry her shopping bags while in the mall all day Saturday? He’d be happy to.

Got a body that needs disposing of? We’ll never know about this one, but I’m sure he would’ve volunteered.

And while all this attentive behavior seemed nice and sweet, it was actually making him less attractive. And it wasn’t long before he got dumped for another man who wasn’t such a doormat.

Now don’t get me wrong, I’m not saying to never do anything for a woman or be there when she needs you.

But you need to balance this out with having a life of your own. Sometimes you need to actually put yourself first and tell us no.

We may even pout and try to get you to change your mind, but deep down we want you to stick to your guns.

Being unavailable from time to time and not giving in to our every whim is going to make us respect and desire you more.

Keep these two points in mind from now on and you’ll eliminate a lot of the most common doormat behavior I see in men. 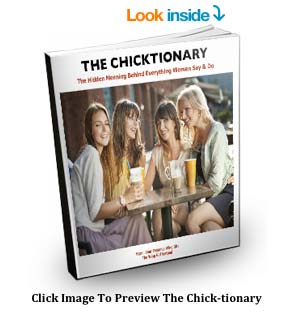 And if you want to decipher what we really mean when we say ‘nice guy’ or anything else, you need to check out The Chick-tionary: The Hidden Meaning Behind What Women Say & Do.

This is a manual that translates everything from ‘woman speak’ into practical terms every man can understand. Plus, it comes with bonus interviews of beautiful women revealing the secrets behind everything they say. You can check it out by clicking here.