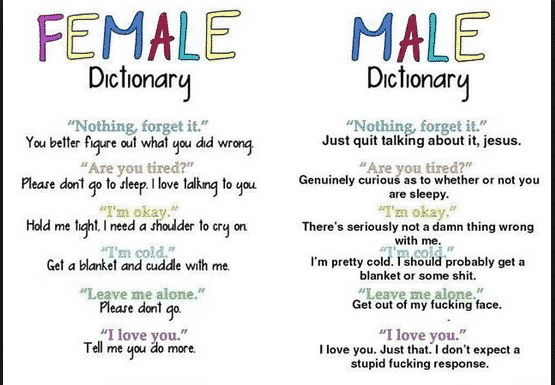 Ever been overseas to a country where you don’t speak the language?

It can seem next to impossible to communicate with anyone.

Which makes even simple things 10 times harder than normal.

You’re asking someone where the train station is, and they’re giving you directions to the nearby Starbucks!!

Ah, maybe that’s just part of the charm of traveling.

But what if you had this same language barrier day in, day out with EVERY woman you met?

It’d probably frustrate the hell out of you, right?

Imagine you were talking to your dream girl, and you couldn’t understand a word she said!

It’d certainly make it A LOT more challenging to get anywhere with her, wouldn’t it?

How would you know what she was trying to tell you?

How would you know if she was into you or already had a boyfriend?

How would you know if you’re moving toward the friend zone or the end zone?

It’d be pretty freaking hard to figure any of this out!!

This is basically what’s happening already with every woman you talk to.

Now before you start thinking your trusty Wing Girl has gone crazy, let me explain.

The way we women communicate is COMPLETELY different from how you do.

Sure, the language is the same. But the meaning of our words varies greatly.

So if you’ve ever felt that women don’t say what they really mean, you’d be right!

We don’t. At least not always.

But why is this?

1. There’s consequences to what we say.

If we say something that pisses you off, are we going to get verbally or physically attacked? (Both of these happen more than you think.)

If we say something too sexual, are we going to get branded a slut or potentially put ourselves into risky situations?

If we say something that makes us seem too eager, are you going to get bored and lose interest?

We know from experience that saying exactly what we mean can lead to an outcome that we don’t want!

This one is huge. We feel like if we have a connection with you then we shouldn’t have to tell you what we’re thinking or feeling.

You should just KNOW without us having to say!

Now of course things would be easier if we said exactly what was on our mind, but we’re not built this way.

In our minds, when you show that you can’t figure out what we’re really communicating, we feel misunderstood by you.

And feeling misunderstood does NOT put us in a sexy mood.

Are you able to handle us and stay strong through all of our female drama and BS?

Many guys aren’t, and we need to feel that YOU are.

So if we’re always telling you exactly what we mean, it makes things too easy for you… I know you us now don't you??

We need to make things a little more challenging than that, or else we won’t know if you’re a man or a mouse!

Once we can see you’re capable of handling us, that’s when we start fantasizing about you man-handling us 😉

So there you go, those are just 3 of the reasons why what we say doesn’t always equate to what we mean.

Now, the ideal way to solve this problem would involve me by your side acting as your ‘womanese translator’.

So I’ve devised a solution that’s the next best thing!

It’s called The Chicktionary and it contains everything we women do and say that confuses men.

Check it out by going here:

I’ve decoded everything for you… turning crazy ‘girl speak’ into a clear explanation of what she ACTUALLY means.

It’s the closest you can come to having me there right by your side, whispering into your ear what the girl you’re talking to is trying to communicate.

You’ll never be at a loss again for what a woman really means, or left confused about where you stand with her.

She’ll be speaking in a language you’re totally fluent in, which will put you ahead of almost all other men!!

Imagine being the only guy in a room full of beautiful women who knows how to speak their language.

Hell yes it is and I'm happy to facilitate this kind of cheating!

I'm your Wing Girl… That's what I'm here for!

P.S. What do you think it means if you’re flirting with a woman and she then goes and talks to other guys? Is this good or bad, and how should you handle it?

Find out exactly what it means by clicking on the link below:

On that page click on the picture on the right hand side under ‘Look Inside’ and I’ll reveal the surprising answer to you.