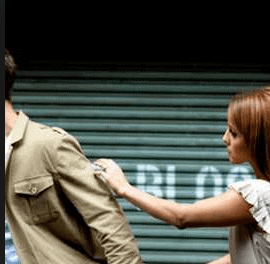 Cling wrap is only for wrapping up leftovers and is not to be used as a tactic for getting and attracting women. Here's a lesson on how to always leave her wanting more.

The other night I went out with Kristen and a couple of my Wing Girls.  As you know these girls are all very nice to look at so it didn't take long for guys to start flocking to them.

There was one guy in particular that I wanted to tell you about.

This guy came in with great game. He walked up to us with awesome confident and quickly had us all laughing and engaged in conversation with him.

He wasn't super attractive but I could tell the more he owned it the better looking he became to my friends.

But then, after about 10 minutes he ran out of things to say and just hung around. It was as if someone had sucked all the air out of him and he was just left to float around where we were sitting.

It was weird. It was uncomfortable and every second longer that he stayed, his value dropped.

And then Kristen looked over at him and said “Nice to meet you.”  Which is girl code for “I'm trying to be super polite but what I really want to say is get the F out of here.”

And he sadly walked away.

After he left, we all went into Wing Girl mode and started dishing out advice on what he could have done and what we'll tell our clients to do so that they don't end up like that guy.

The most attractive thing that a man can do with a woman is leave her wanting more.  Which means to walk away before things get stale.

He should have just walked away after a high point, gotten back to his life and caught up with us later which would have LEFT US WANTING MORE.

The more you stick around, the more we think “Oh. I've got him.”  It's not in a malicious way but more in a subconscious way that lowers our libido and desire for that guy.

Don't be that guy.

Do not linger and hang around hoping that if you stick around long enough you'll win against all others.  It doesn't work like that with us.

The thing is that 2 of 5 of the women at the table were into him prior to the extended linger.

If he just left at the right time, he would have built intrigue, we would have been talking about him and most likely someone would have either gone home with him OR tried to set up a date with him.

But instead he went home alone.

In my program How To Become A Man Women Want I go into detail about the engage – disengage rule.

This rule tells you exactly how to know if you've overstayed your welcome and how to exit gracefully so that you'll always leave her wanting more.

Go check it out here: https://www.winggirlmethod.com/special/htb/020/

Thanks this aduais is helpful