Older men are sexier than younger guys to a HUGE number of women.

These 3 traits make them a solid catch for any woman.

If you’re an older guy, you’re about to get a clear-cut understanding of the amazing advantages you possess in dating.

Once you know about these advantages, you’ll feel 10 times more confident going out and meeting women.

If you’re a younger guy reading this, I suggest that you ask yourself “how can I model these traits in my own life?”

First, there's one issue I need to address.

And honestly, you’re not wrong.

Most women do like the fact that older men, in general, are “financially stable”.

But that’s where it ends.

It’s not like women want you to have millions of dollars, five super-cars, a private jet, and ONLY then they’ll be interested.

Yes, some women are exceptions.

But if you care about your own happiness, you’ll stay away from those money-hounds.

Most women are more than satisfied when they see you have a stable source of income and that you know how to manage your money.

You don’t need to be Jeff Besos, Elon Musk, or some other gazillionaire.

Now let's discuss the 3 traits which make an older guy sexier to most women. 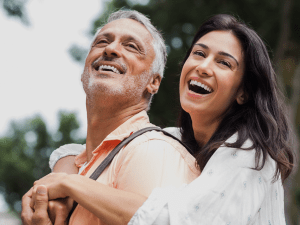 Neediness is the number one killer of attraction.

Whereas non-neediness, or in other words, a lack of neediness is one of the biggest creators of attraction.

Fortunately for many older guys they usually tend to be non-needy by default.

And the reason for that is quite evident.

Older men have their act together.

They’re also mature enough to understand that they don’t NEED a woman’s approval to feel happy and worthy.

So when it comes to dating, they don’t play any games. They’re much more direct about their interest in a woman.

If the woman doesn’t reciprocate that interest, they’re willing to move on quite easily.

And that’s exactly how every guy should approach dating.

This level of non-neediness is extremely appealing to us women.

It shows strength of character, maturity, and massive confidence.

And it makes women want to earn YOUR approval, which makes getting dates so much easier.

Older guys are usually more cool, calm, and collected in the face of pressure and challenges.

In other words, they are non-reactive.

They understand that reacting impulsively leads to no good.

So, instead of reacting to things, they take their time to think and then respond appropriately.

This composure under pressure shows tremendous confidence and masculinity.

And it’s incredibly sexy to ALL women because we want to be with a confident, masculine guy.

What’s more, this quality of non-reactivity is so attractive you’ll even see it portrayed by fictional characters like James Bond, who is supposed to represent the “perfect” ladies' man. 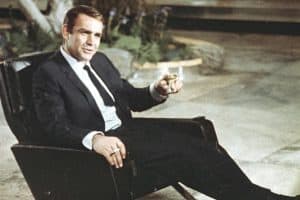 Bond almost never reacts impulsively, no matter how challenging the situation is.

In interactions with beautiful women; the type of women most guys would get super nervous around he is simply not rattled.

There’s this one bond scene that I love when this girl Vesper makes a snarky comment about him and his boss by saying “I’ve never seen so much money go out the door so quickly”.

Bond replies back beautifully with “or quite so stylishly” and he flashes this perfect smirk. Unphased and confident as ever.

He maintains composure and responds playfully and this instantly softens Vesper.

And I can bet, whether Vesper wanted to or not, she found Bond’s non-reactive behavior very attractive.

There’s no girl that wouldn’t.

Relationship competence is a sexy quality ALL “older men” should have

Older guys generally have had a good chunk of relationship experience.

As a result, they know how to handle a relationship much better than younger guys.

They have learned how to treat a woman with respect and appreciation.

The art of being the leader in the relationship is something they have mastered at this point in life.

Plus, they even have a better understanding of how to please a woman in bed.

All this knowledge makes them much more competent at having good relationships.

This means they’re a much more reliable choice for us, women, to have a relationship with. 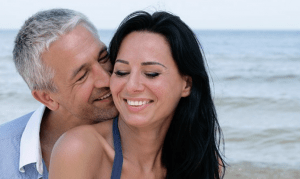 Now combine that relationship competence with traits like non-neediness and non-reactivity, and you have a truly sexy man.

The only problem, even though older guys appear to be a sexier and a more reliable choice for a lot of women.

There is a social stigma that's attached to dating an older guy that keeps most women from moving forward with them.

The feeling that it would be “wrong” or “weird” to date an older guy seems to be on the mind of most women.

Those are common questions that take over their minds.

Since this negative attitude towards dating older men has been deeply ingrained in a girl's mind, there's only one way to overcome it.

You need to override that negative attitude by creating irresistible sexual chemistry while you interact with the girl.

How do you create that irresistible sexual chemistry with younger women?

Well, turns out, there's only one way for that as well – at least that I know of.

You need to flirt with her in a way that stimulates her female brain and ignites sexual chemistry naturally.

Once you do that, she'll be compelled to go to that “next level” with you – whether that's going on a date, having sex, or starting a relationship.

If you’re not sure how to flirt in a way that creates sexual chemistry naturally, I've good news.

I can show you how you can flirt like that with any woman you choose right now.

All you have to do is go to winggirlmethod.com and watch this video I made for you.

In this video, I'll tell you about a proven formula you can use to flirt with any woman, anywhere, anytime and create overwhelming sexual chemistry that compels her to take things to the “next level” with you.