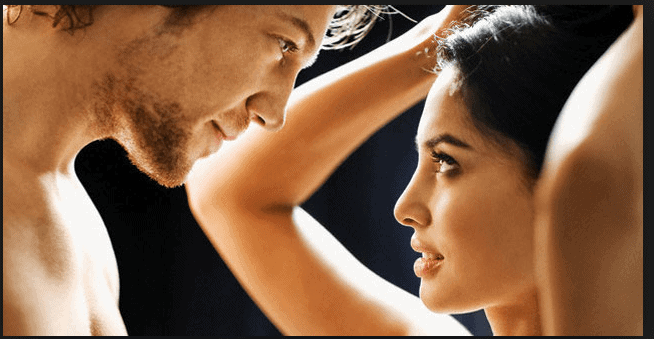 I’ve been getting a ton of emails from guys asking about how to build sexual tension and create excitement in their approaches and interactions.

I can tell you first-hand, that this is one of the most important elements when interacting with women you want. If you can't build tension there is no “spark” and therefore no attraction.

Well it COULD go somewhere, but I’m pretty sure it’s no where you want to be going.

Here’s what happens when you build sexual tension correctly:

She immediately sees you as a “sexual option” instead of just a friend or just some guy who she’ll never remember.

Thing #1: Start Stealing From Women &
“Testing” Them Before They Test You

I know that I always say that women don't test… that's why I always put air quotes around the word testing, BUT in some ways we do. It's just not in the way you think.

We don’t do it maliciously or to hurt men. We do it to help us qualify and select men that can handle us.

When I tease a man or ask him to do something for me and he just does it or gets rattled by my teasing, that’s when I know I’ve got power over him and that he can't do anything for me that I can't do myself. Which means zero attraction and I’m ready for the next guy.

Which is why it’s time for you to start flipping the script on us women by testing us first.

I recently had a guy named Patrick James on an episode of Ask Women Podcast (listen to the podcast here episode 237) and he explained this method best.

I thought it was genius.  He advised that you start collecting all the testing lines women give you and then use them on us women in the future.  So smart right?  And kind of cute.

For example, one of the most common tests women throw out goes like this. You guys are talking and having fun and then she says “So how old are you anyways?”.

The way you would flip it is if you guys are talking and then early on in the conversation you pause, look at her and say “Wait. How old are you?”  and then no matter what you can tease her about her response.

Some other common ones to use are: does that line work with most men? You say that to all the guys don’t you.  Or just so you know we are not going home together.

These are fun, light and playful lines that shows a woman you can be just as selective and challenging as them. It also helps escalate the conversation to that flirtatious level to help build sexual tension.

Playfully teasing is what sets apart the “nice guys” from the guys that get the girl.

Nice guys don’t tease women because their afraid to create tension or disagreement or worse create an angry woman.

The thing is that women love good tension and that’s why playful teasing in a good hearted way can quickly turn an innocent interaction into a heated, sexually charged one.

Playful teasing shows a woman you can handle her and are not afraid to ruffle a few feathers in the process.

For example, a low level way to initiate teasing with a girl would be something like this.  She tells you her favorite movie is something super girly.  The typical, friendly, nice way to respond to this would be “oh yeah. I love that movie.”

This response won’t even have an impact on her.  It’s polite, boring, pleasing.

The response that will catch her attention and have her biting back and playing with you is something like this “X movie? You’re such a girl” said with a cute smirk.

This response catches her attention because it shows she hasn’t won you over yet. She doesn’t have the upper hand and THAT excites her and makes her want more.

Think of playful teasing as anything that could have been done on the 3rd grade playground. Play fighting, thumb wrestling, tickling, bantering… all these things are light hearted, fun and can easily create tension with a woman you just met.

So many guys that we talk to at The Wing Girl method are down right scared to show that they are sexual.  As if us women don't know that they have a penis or desires or testosterone.

In turn they hide their intentions and pretend that they have 0 attraction to the women they are highly attracted and interested in.

How can you have sexual tension with a woman if you’re constantly shoving anything sexual in the closet?

Let me explain what I mean by “be a sexual man” before you start walking down main street in a pair of chaps, oozing sex and creeping women out ?

Not that I’m totally opposed to that if that’s what you are into.

If you’re building attraction, she’s interested in you and wants things to escalate… and she subtly gears things in a more sexual direction. Or even directly says something sexual.

Now what most guys will do is act shocked and freeze if a girl flirtatiously brings up sex.

But you’re not most guys. You’re a SEXUAL guy.

Which means you don’t become stupefied when a woman brings up sex and politely steer things in the PG, safe direction.

Instead you roll with it. Completely relaxed and comfortable with your sexuality.

For example: she says something like “I love wearing thongs”

The regular guy might try to laugh it off and shy away from the conversation.

You’re the sexual man so you charge head-on.

“So what color is your favorite thong?” you say with a smile.

Or you could even throw in a little joke like “Me too. I’ll show you mine if you show me yours.” with a little smirk and then say “so what color is your favorite thong.”

Then you can lead her back and forth topic to topic, asexual or sexual.

This shows her that it’s not a big deal to you and you won’t judge her if she decides to make a move.

There are tons of other ways to build sexual tension within a woman but I don’t want to overwhelm you.  Take these 3 examples that I’ve shared with you in this video and start using them.

Practice, tweak if needed and then practice again.

I promise you, you will start to see a difference in your interactions with women.  No longer will they walk away thinking “aw what a nice. He’s perfect for Steph.”

Instead they’ll be thinking about ways to get to see you again because being around you felt so good.

For more tips on how to create sexual tension with women check out my program the F Formula that men are just absolutely loving!  It's my new system that shows you how to ignite attraction and chemistry in women easily, naturally and authentically.

It’s the wing girl method’s blueprint for effortlessly flirting, attracting and escalating with any woman.

Go to winggirlmethod.com/f-formula to check it out now!