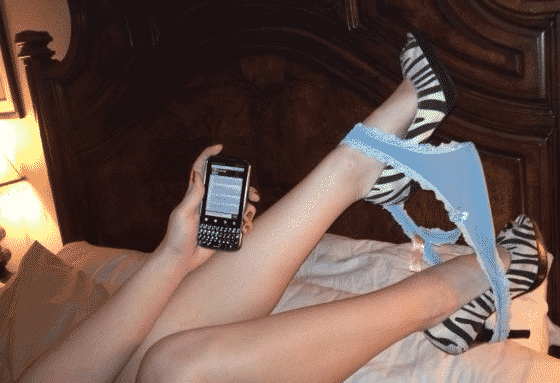 Today I want to talk a little bit about getting sexual via text, or “Sexting” as the kids are calling it these days.

In his new book “Text 2 Sex,” Race de Priest breaks down all his greatest techniques to seduce women and get them over to your place, all by sending texts.

If you don't know this now, it is my duty to tell you that it is your job as the man to escalate the conversation to a sexual place. One of the biggest problems that I've seen guys have is making that simple transition from innocent conversation to sexual conversation. There is one great technique that Race taught me called “directive misinterpretation.”

Every text that a woman sends provides you with an opportunity to take something she says and turn it around to make it sexual. Some of my favorite techniques include:

Sexual innuendos are statements that talk about, or describe something non-sexual in a way that alludes to something sexual. Sexual innuendos are the foundation to creating and building sexual tension extremely quickly via text. Because it is so easy to incorporate them into your text, these should be the backbone of your sexual texts starting immediately.

The reason that sexual innuendos are so great is because they allow you to subtly introduce sexuality in such a way that seems fun and innocent. It's very sad that in our culture, talking about sex is very taboo, and this allows for a safe way for people to get sexual via text.

However, it should be noted that beautiful women are very used to getting sexual texts from many men, and using her sexuality as a way to influence and get what she wants. Your mindset should be very loose and relaxed while getting sexual with girls via text. Remember – this is no big deal because you are used to this.

Keeping it light and playful and fun will ensure that you always have fun getting sexual via text. Use these ideas correctly, and you'll be transitioning from sexting to sex in no time…

To learn more about how to seduce beautiful women using only your phone, check out Race's new book “Text 2 Sex.”