I just got an email from a past client of mind telling me a very juicy story from a New Years Eve party he went to a couple of weeks ago and I just had to share it with you.

The email was titled: All because of you Marni…

If you've worked with me before you know praise and good feedback is my gogo juice, so I immediately read the email and it was amazing.

I'll give you the important facts so that you can use what you read TONIGHT when you are out and about interacting with women….

NOTE: if you are not going out tonight then FIND PLANS AND GET OUT OF YOUR HOUSE!!!! Women are going to come knocking on your door…. at least not yet 😉

Back to my client.

Let’s just call him John for the purpose of this story, was out on New Year’s Eve with his new girlfriend (high five to John from me) and a group of his friends. Most are single.

I of course didn't see her but that's how John described her to me.

She was hot and all of his friends went into shock mode and totally ignored her because they weren't sure how to talk to her.

Since John had been in this position not very long ago he decided to play Wing Man for his friends.

All John’s friend had to do was come in at the right time and most importantly… not mess up.

So John starting talking to the girl and of course was full of confidence. He did everything he had learned from me about approaching, leading, connecting and talking to women.

His body language was loose, his tone was bold and he was in full form.

It obviously helps knowing he had a girlfriend and he assured me he didn't cross the line once and let his girlfriend know what he was up to.

After a few exchanges with the Ms. Hotty he finally introduced her to his friend, who he totally pumped up before hand and then left them to it.

Sadly the friend did not have the same instruction as John had from me and totally messed things up.

He played Mr Nice Guy by making empty compliments and offering to buy her drinks etc….

He basically ruined and any all chances of Ms. Hotty seeing him as an option when it was so kindly delivered to him on a plate!!!

Cut to later in the night and Ms. Hotty can't stop staring at my client and trying to get his attention.

Instead of focusing on his friend, she's all over her best friends guy.

NOT GOOD but that's a whole other story.

At the end of the night, he sees his girlfriend and Ms. Hotty sitting together in a close huddle giggling.

Now 2 months ago this would have been music to John's ears BUT he was really into his girlfriend and kindly declined the offer. Making sure he did not offend Ms. Hotty.

So after John had given me the full run down of the night he did the thing I absolutely LOVE. He told me how what I had taught him had made this night happen. And how this would have never happened for him in 2018.

Everything he learned about body language and confidence and leading and being bold had all sunk in to a point where he was literally turning women on without even trying to do it.

This man he's always wanted to be was now who he was!!!

And hearing that made my day. I LOVE hearing success stories like John's.

If you’d like to find out EXACTLY what I’ve taught John so that YOU can be another success story, which you know makes me soooo happy, then here’s what you need to do:

Check this out: https://www.winggirlmethod.com/special/htb/fformula/ it's my program that gives you step by step instructions on how to flirt just like John did.

Have everything I’ve taught John at your finger tips, ready to go whenever you need it.

I can’t toot my own horn enough. ha.

I mean who could blame me when guys are literally getting threesomes thrown in their laps?! 😉 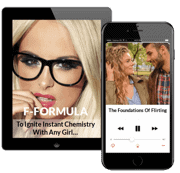 Go here to get your hands on the F Formula right now:
https://www.winggirlmethod.com/special/htb/fformula

The Best Female Friend You’ll Ever Have,