It was my coaching client's first time getting laid in 6 years. The major turning point for him that ended his insane dry spell? He learned how to harness confidence to get what he wanted. Here's his story:

What’s the longest dry spell you’ve ever had with women? For some guys, a couple of months is a long time to go without sex. While for others, sometimes years go by without any action. And when you’re suffering through it, sometimes it can feel like it’ll never end.

Donnie hadn’t been laid in a full 6 years! But because he’s been listening to his Wing Girl’s advice and taking action, that dry spell came to an end last week. And while I could go into the gory and explicit details of how he met this woman in a bar… Then used what I teach to get her so attracted that she happily went home with him to bang his brains out all night long… I’d prefer to highlight one part of his email that really stood out:

“I used to see confidence as always being sure that what you do is going to work out. I now understand it more as being decisive, or going after what you want and knowing that if you're wrong or if it doesn't work out, then it's OK, you're still going to be cool.”

This is such an awesome way to look at things! Because when you think about it, if you already knew for certain something was going to work out… It wouldn’t require confidence to take action, because there’d be no risk of failure. But in life, there are no assurances of everything working out.

That’s one of the reasons we women are so attracted to confidence in a man. He’s not going to let fear of the unknown stop him from going after what he really wants… Which means he’s more likely to be successful and reach a higher level of status in society. Now, this isn’t something we consciously think about when a guy approaches us. But millions of years of evolution have wired us to feel attracted to guys who portray this kind of attitude.

So here’s the lesson in this for you:

If you’re waiting for everything to be perfect before you go and approach a woman, stop it! There are so many excuses I hear all the time:

All of these things just reveal a huge LACK OF CONFIDENCE… And it’s this attitude that actually repels women, not the circumstances themselves. For example, I know plenty of men who are incredible with women that have never seen the inside of a gym… Nor do they have any witty or clever opening lines they use. But they do have the balls to walk up to a woman they like and try to make something happen. If you can at least do that, you’ll get some success just from the law of averages. 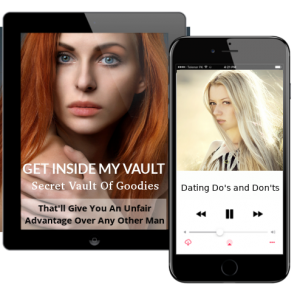 However, if you want to stack the odds in your favor and get CONSISTENT success… Then you need a proven blueprint to follow, just like Donnie did to break his 6 year drought.

And that’s exactly what you get inside my secret vault of trainings, which is the best deal I’ve ever offered.

It has 21 trainings locked inside just waiting for you to come along and access them… No matter where you’re currently at with women, the info inside my vault will take you to a completely new level.

Click here to get all the details and see how you’re saving hundreds of dollars.