I have a great video example of how to talk to woman when she is feeling insecure and acting mean towards you. Here's what to say to get her to calm down, be happy and see you as her hero!

The key to get a woman to calm down and be happy, is to know how to speak directly to her insecurities.  The first thing you have to acknowledge is that she may have insecurities no matter how hot or perfect you think she is.  Every woman has insecurities. 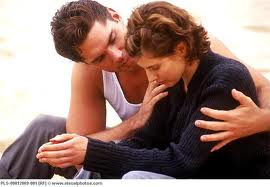 The second and most important thing is to know how to show her you appreciate her for any and every difference she may have.

I have a video clip below, with my commentary included, that shows an example of a man that was successfully able to get a woman to calm down and be happy. It's a clip from the NBC show Love Bites that was on a few weeks ago.  Truth – it's a horrible show, but for some reason I am mildly addicted to it.

Every time I watch, it sparks an idea for a blog or topic to talk to you about.

The background to this clip is that the boyfriend discovers, through looking at the cable bill, that his GF has a small fetish for guys in uniform. When he confronts his GF, she is mortified.  Not mortified that she has the fetish, but mortified that it has been revealed to her unsuspecting boyfriend. AND that he may be see her in a different light, possibly not like her anymore and want to break up with her.

At the time, he handles it horribly. Poking fun at her, making fun of the fetish and most importantly, not attempting to understand her thoughts surrounding the fetish.  Actions that made her feel even more insecure and embarrassed.

To help her feel better he lies and says he has a fetish.  Below is a video with my commentary on how the whole scenario plays out.

Even though there were some minor hiccups at first with this situation, this man not only recovered but became his GF's hero! He was honest, clearly expressed himself and helped his GF, not only feel comfortable with her fetish, but empowered by it. Which in the real world, translates to new fun surprises in the bedroom and an open door for sexual communication.

If dealt with correctly, bumps in dating and relationships can lead to a strength in connection, a deeper comfort level and plenty of fun new adventures 😉

Sign up below and be the first to hear about discounts, new posts and tons of tips not seen on my website.