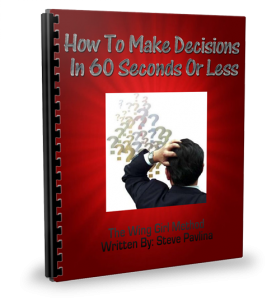 Women LOVE men who are decisive and can easily make a decision. This can be considered the defining quality of a true man.

“A man who can make a decision in a split second, especially when under pressure, is the sexiest thing to me.” – Carly 27

Whether it's making a decision about where to go on the first few dates, what show to watch on TV, or how to pack up your apartment on moving day…  Decision making is a must have skill for any man who wants to attract and keep a woman interested.

“When a man can't make an important decision, I think to myself, what do I even need you for. I know it's harsh but it's what I think.” – Jennifer 31

Recently, I had my own struggles with making decisions and stumbled upon this amazing resource for how to make decisions in 60 seconds.

Since I have found this, it has been a key resource that I give to all my private coaching clients.  Check out what one of my clients said after receiving it:

Wow, wow, wow, wow, wow. That is such a powerful piece. That resonated in my heart quite a bit… so simple and powerful. I just started looking at things in the past and asked myself was that me… and no for a lot of the negative stuff.

Thank you so much for this Marni!
-Randall

Then I received another email from a virtual coaching client named Shawn telling me that he had been “listening to the interview with Jake and found that he too was guilty of not making decisions especially in the beginning on a relationship (with women) which would later turn catastrophic.”

So I of course sent him the FREE tool for how to make decisions in 60 or less and he also loved it:

This is a question I should have actively asked myself in my previous relationship. The question not only relates to male/female relationships but as the article indicates, it affects everyday life.

Moving forward, this is the type of approach I will take, not only for selecting and dealing with women, but also generally. As a matter of fact I tried it this morning and it was much easier than what I was doing before.

I may have told you that I recently developed a fear of approaching women at the train station. Well, this morning I never had on a rubber band but I imagined myself stinging myself with one, then asking myself  “do I really want to stand here and not approach her?” after that I found myself moving up to her and played a prank. I asked her if she realized that an orange spot was on the back of her pants. She started looking for it then I smirked and told told her I was just joking, then she smiled, the train came at the same time. I never continued the interaction as she was not someone I was attracted to but I just did it to get over that fear and to train myself to say anything to anyone as long as it's not disrespectful.

So, now I want to provide you with this tool as well!

Discover how to make decisions in 60 seconds or less with this free tool. Click Here To Download It Instantly For FREE!

Use this for every decision you make moving forward. It is a life saver for me and it will be one for you too!