I will show you two simple ways to turn awkwardness and nervousness into rock-solid confidence as fast as possible.

All right, let me tell you a quick story. It's Saturday night and this guy named John is out with his buddies and they're all laughing and having fun and he is the life of the party. He's telling stories and making his friends laugh.

And John feels completely at ease. His magnetic personality shines through and everyone is taken in by his charisma. Then he sees a cute woman. A gorgeous brunette with long legs and a short dress. So he decides to go over and work his magic. He approaches and says hi. And then something terrible happens.

He completely freezes up and has no idea what to say. He's super attracted to her but can't think of anything to talk about. He just went from cool and collected to needy and desperate and scrambling for something to say. So he tries to follow up with a few questions but constantly fumbles and messes things up.

And everyone at the table loved him before but this girl is looking at him. In just a few minutes, he went from feeling like he was on top of the world to feeling like a total loser. And the question is why is it that a guy like John can be confident with his friends but not too an attractive woman or a woman he's attracted to? What changed? 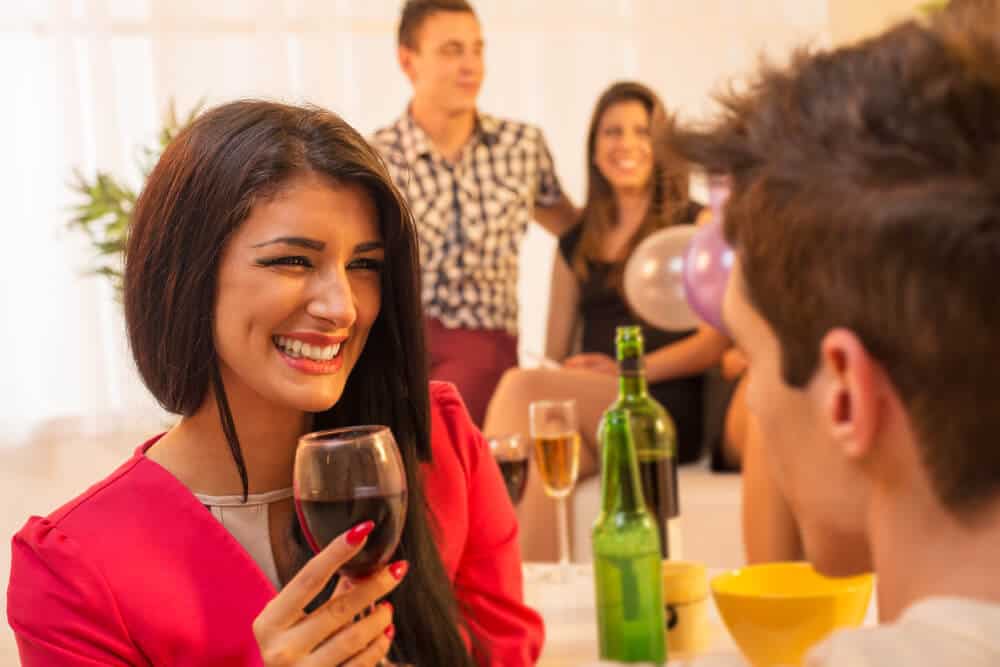 And more importantly, if you're in a situation like this, how can you go back to being relaxed and confident? That's the big question. I will answer all of those questions and show you two simple ways to turn awkwardness and nervousness into rock-solid confidence as fast as possible. Trust me, this is going to dramatically improve your results with women and with people.

So back to John our friend. As I said, he was extremely confident and charming with his friends. He was the most magnetic person in the room until he decided to go up and talk to the attractive brunette. I'm sure some of this is resonating with you. And then the moment he went up to her, he lost his charm and he lost his confidence. But why did this happen?

Well, first of all, it is not exactly his fault. It's actually because of this thing called Stifling. So stifling is that awful feeling you get when you're so nervous that you can't access your full personality. Especially when you're talking to a girl that's hotter or that deep down you feel is out of your league. So stifling is usually caused by past rejections, insecurities, and fear. So in other words, if you've had terrible experiences with women in the past or you've never had an attractive woman interested in you, then you're likely to get stifled when you approach one.

Stifling is basically a mental state. Your brain puts you in to protect you from potential pain. So because you've had bad experiences in the past, your brain which likes to predict things based on the past. Assumes that you might get hurt again while talking to a pretty lady and it doesn't want you to get hurt. It's taking care of you. It only lets you go for the safe girls that you feel equal to or above in the pecking order and it stops you from going for higher quality women that you really want.

The way it stops you is by limiting or cutting off access to your natural confidence and term. Instead, flooding your mind with anxiety and nervousness. Now I know what you're thinking. You're thinking: Marni, stop telling me what this thing is already. Tell me what I should do when I'm stifled so I'm able to talk to beautiful women without being nervous, shy, or awkward.

So here is my answer to that. My answer is that there are two solutions to this. One is a short-term fix that will help you at the moment by reducing nervousness and anxiety. And the second is a much longer-term fix that will permanently protect you from being stifled. So I'm going to give you both. 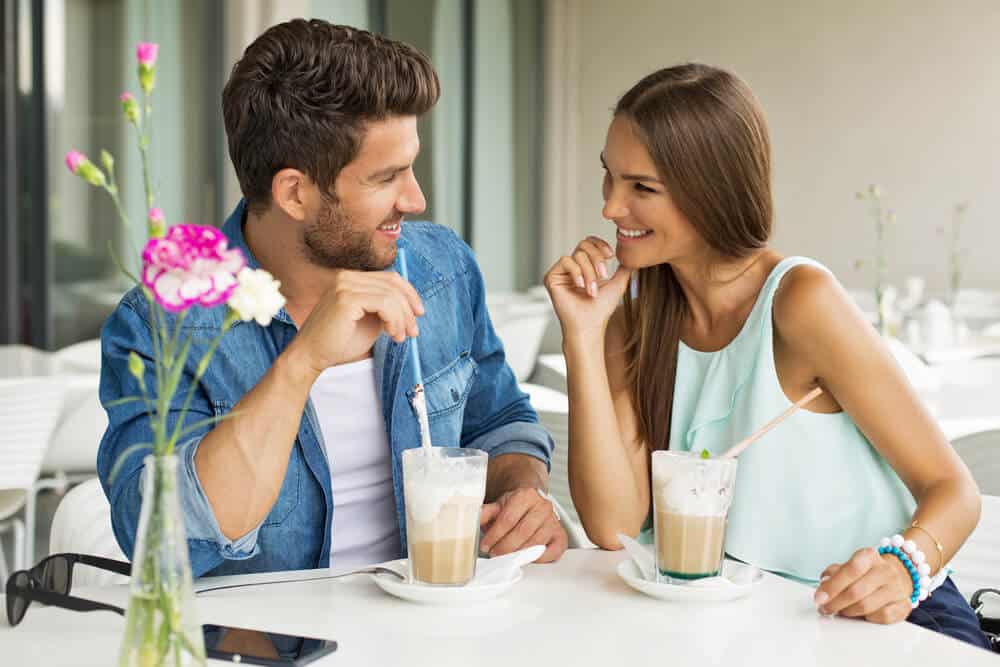 Starting with the short-term fix which I call the Mind Body Hack. So you assume you're stifled. A bunch of negative thoughts just start popping in your brain which makes you nervous and cuts access to your natural personality thoughts like what you have to say isn't good enough or you're never going to impress a girl like that or she's too good for you.

That she's way out of your league and so on and so forth. So trying to change these thoughts by sheer will, especially in the moment is extremely difficult. In fact, the more you engage with these thoughts, the worse they get. You've had that experience. Leading to a downward spiral of negativity that makes you feel worse and worse with each passing moment.

So here's what you can do and I think you should do it instead. Tap into your body. Research shows that the way you use your body can influence the state of your mind. So by using your body the right way, you can reduce the anxiety and negativity in your mind dramatically. So when going to your body, there are four parts for you to focus on.

First is your posture which I have to get better at. So you want to expand yourself. So you pull your shoulders back, puff out your chest, and chin up. Ask yourself
how your posture would be if you were a king then do that. That's how you picture a king.

The second thing is about your arms. So don't keep them stuck to your body. Use expansion gestures when you talk. It just like makes you feel freer. You probably already do that when you feel confident. But when you're stifled, the hands get stuck in the pockets of the body. So you want to move it around and make use of this. So not only will it give you a boost in confidence but it's also it's going to make you more captivating.

The third piece is your voice. So you want to be loud and expressive. When you're stifled, your voice automatically gets lower and softer and you want to break that pattern. So be loud. In fact, I'd say be 10 louder than you naturally are. And also end your sentences not by going up like a question but directed towards the person because you're sure of what you're saying.

So once again, it's going to give you a boost of confidence and make you more captivating. So lastly, once you get those things going, get to your face. No matter what you have to say to someone, try to be as animated as you can with your face like smiling is the best thing. Don't have a plain expressionless face. Use your eyes and your facial muscles. I'm doing it too crazy right now but you know what I mean.

Work them out and again, don't be afraid to smile. Smiling or laughing will immediately lower your anxiety to a very large extent and it'll make you come across as warm and friendly which is fine in the beginning. It's better than nervous and creepy.

So if you get these four elements of body language on point, you will start to get out of that stifling state. Your anxiety will lower. You're going to be less awkward and shy. And it will all happen in 30 to 60 seconds. So it's very fast. However, the only problem is the mind-body hack as I said before, it's a short-term effect. Short-term fix.

It doesn't prevent you from getting stifled again. It just bails you out of the situation if you fall into it which is a good thing but you still need a long-term fix. And that's something only a handful of people know about. You see deep down, you already have all the confidence and charisma you need to make women go crazy for you, showed it to your friends. And I don't say that to flatter you. It's the truth. You were born that way. 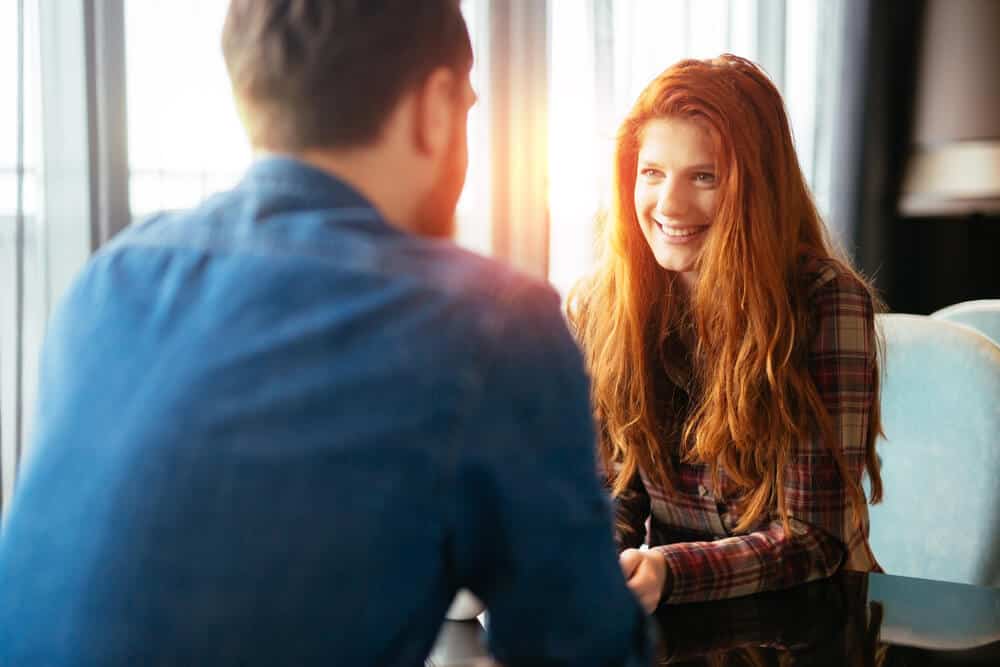 But through life's difficulties, you develop insecurities that are now blocking that side of your personality. And the good news is there's a proven method to destroy those insecurities. it just takes 10 minutes a day so short. You can do it from the comfort of your own home and it will permanently remove your insecurities and fears so you'd never get stifled around a woman no matter how hot she is.

So think of it like turning on a garden hose. At first, nothing but muddy brown water dribbles out. But after a while, crystal clear clean water flows out. This is how you'll connect to your inner charisma by getting rid of all those negative emotions, blocking them from coming out. And once you flush out all that negative crap, that negative emotion, your true confidence will shine. Making you feel like your best self around women.

So imagine what your dating life would be like. You'd be 100% in control of your emotions. You would be able to approach any woman you choose, no matter how beautiful she is. And you'd be able to have a conversation without breaking a sweat. Your mind will be able to operate at its peak performance. And you'd be as quick as lightning and always have something to say. You'd never run out of things to talk about.

Instead of being anxious, you would be comfortable in your own skin. And this means you'd be able to create red-hot attraction and strong connections with most women that you meet. And 99% of guys will never be able to compete with you. You'd have 10 times the phone numbers, dates, and options compared to the average guy.

So this method is like a cheat code for building confidence and transforming your dating life forever. So what is it, Marni? Well, I've been working closely with dating coach Mark Sing who specializes in NLP Visualization. Together, we've created a visualization that will literally replace your negative insecure thought patterns with strong positive ones that fuel your confidence. This Visualization Program is unlike anything you'll ever see and it has worked miracles for my clients.

For example, before we launch this program, we gave it to a hand-selected group of 46 students. And over a 30-day period, each student went through the visualization exercises for just 10 minutes a day. And by the end of the 30-day period, their success rate with women increased by an average of 300%. That means triple the phone numbers, triple the dates, and triple the sexual encounters.

And I see no reason why the same can't happen for you. So if you'd like to erase your insecurities and build rock-solid confidence that attracts women like crazy, check out the Visualization Program. And within days, you will see a dramatic improvement in your interactions with women. And actually, on the page you're going to, there is a free visualization you can try to test out. I'm absolutely confident about that because I've seen it over and over again with hundreds of our students.

Like I said before, it is a remarkable program that is unlike anything you'll ever see. So give it a try. Check out the Visualization Program now. I know that you're gonna love it.