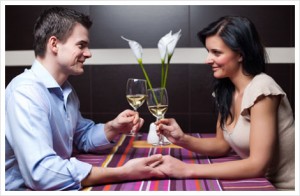 You may worry that a woman may discount you because you have bad skin, a job that causes you to work nights, or because you're a single father.

Luckily for you guys, women rarely write a guy off solely on his physical appearance or for one ‘deal breaker' in his life.

Women are pretty different to men like that. Guys can be very set in a physical ‘type' that they have; whilst women evaluate the men they meet on a whole bunch of different requirements.

When you approach a woman of course they will be thinking about how you look, BUT they'll also be weighing up your general vibe, what you're wearing, what you say, how you present yourself, whether you make them laugh, what they know about your character etc…

That's already a big list and it just goes on and on!

You may now be worrying that it's impossible to pick up a woman if they're looking for so many things! Actually it's just the opposite! Even if you think you have something counting against you during your initial approach (maybe you have a small build and are after a girl who so far has only dated guys from the football team); that hurdle can be overcome if you present other aspects of who you are positively.

You will only have a problem if you have nothing else going for you… and I know that's not the case!

I'm not going to lie to you, some women are superficial so they may not initially be attracted to you if you're not their ‘type'; or may be concerned if you don't have the job or family situation that they would ideally like.

However, the easiest way to stop them from judging you on that one thing is to demonstrate all of the other great qualities you have going for you. If you walk up to them worrying that because you're not dressed very smartly that she won't give you a chance, then she probably won't.

Instead, I want you to say ‘fuck it, I know I'm a great guy' and go after her anyway!

Having this positive attitude, this charisma, this belief that she will get it, will make it very difficult for her not to turn around and say the same thing back, “fuck it, let's see what this guy is all about!”.

Even if you've got a little something that makes it slightly tougher to meet women, you can still make it work by presenting all the other great qualities you have. Stand up, be counted and put yourself out there: this is the way you will get the women you want to give you a chance. And I'm sure you know that when she gets to know you, she'll like you more and more. So don't sweat the small stuff!

Then let me tell you a quick story.

When I was single I went on several dates with men who had children. Some women will like the fact you have kids, others won't. Whether it is a deal breaker, or not, though will depend on how you go about telling them and how you present your life as a whole.

Most guys I dated who had kids made a huge deal out of when they ‘announced' that they had kids: they made it so dramatic, as if I was going to flip out. They'd say things like:

“I have to tell you something that I should have been honest about before. I have a kid but I really want to live my life still and I want you to be a part of it” blah blah blah!

Because they made it out to be such a huge deal, I got caught up in the emotion of it and allowed this one potential negative to influence how I felt about the guy as a whole. Not just because he had kids but because he presented a negative view of himself to me.

Then I went out with this other guy, who proudly and casually brought up he had a daughter and how being a dad made him an even better guy:

“I freakin' love my daughter.  She's what makes me wake up in the morning, but more importantly she's helped me be smarter about the people I let into my life” He then flashed a small smile at me that made me melt, before returning to our conversation.

See how different the tone was between the first example and the second?

With the second guy I didn't care that he had a kid. He used what could have been a ‘deal breaker' to  show me a whole bunch of other qualities about him that were so attractive: that he can still remain grounded, had a strong character and was a great dad!

So for you, I want you to apply the same mentality to whatever you think is holding you back when you first meet women. I want you to think:

” I've got it, so what, I know I'm an awesome guy and she's going to recognize that.”

TIP: Write this down on a piece of paper and stick it in your back pocket.  For the 2 weeks, any time before you go out and approach women, look at it, then stick it back in your pants.

Go in with this attitude, and that's going to be so attractive, that any small negatives will be blown away by the great qualities you've demonstrated. Put yourself out there, be positive, and she will feel attracted to you.

I'd like to share with you a lot more of what it takes to attract a woman – so I've created a special system just for you called the How To Become A Man Women Want. You'll learn EXACTLY what it takes to communicate with women so attraction happens fast… and so you're never seen as “just a friend” again.