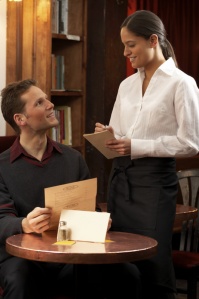 She greets you with a huge smile and a wink every week. Only problem is, it's when you're ordering your morning coffee.

I get tons of emails from guys just like you asking if it is possible to flirt with a girl while she's at work.

Even if you're normally great at flirting with women, you may find it impossible to say the right thing, or even be sure if it's right to say anything, the second she steps behind the bar and the girl you want to ask out is at work.

I can totally understand that: you don't want to bother her and, having been a waitress myself in the past, I can confirm that it does get tiring getting the wrong kind of male attention when you're in the service industry.

I'm not going to lie: attractive waitresses, barmaids and other women in customer service based industries are going to get hit on a lot. When I worked as a waitress after one too many tired lines or routines I did find myself thinking, ‘Oh boy, not another one,' then smiling politely and walking off. I didn't like feeling like an object when I was at work so I would let any crude comments or obvious lines drift in one ear and out of the other.

There were two kinds of guys I encountered all the time when I was working:

1. The ones who were super nice to me, who I secretly  knew wanted me but were too afraid to ask me out

2. The jerks who saw me as an achievement and a goal of “getting the waitress” so they tried to show off in front of me, use lines on me in front of their buddies and generally treated me like a “thing” instead of a person

So how do you ask out a waitress so that you don't seem like just another patron?

Follow these rules and you will be all good:

#1 – Talk about things other than typical “bar or restaurant stuff”. So no hour long discussions about Jack Daniels or where Vodka comes from.  Think bigger and don't be afraid to share about you rather than trying to fit into her life.

#2 – Don't wait for the perfect moment to ask her out. I used to have guys stay till the wee hours of the night thinking “great she's off work, she's totally accept my invite for a date now”. Not true.  I hated it when I could tell guys were just hanging around waiting to ask me out. Felt creepy.  If you want to ask a waitress out, then ASK HER OUT right then and there. Then continue on with your night.

#3 – Remember that work sucks and nobody wants to talk about their job. Do you want to talk about engineering? Law or working at Best Buy? Hell no.  Talk to her about her life outside the bar and show her that you can see past her little apron.

#4 – Make sure you treat her like a lady. Just because you are paying her for a service, doesn't mean everything is included 😉

So next time you are at a bar, restaurant or even a clothing store and see a hot girl working there, approach her, strike up conversation and don't be afraid to ask her out.