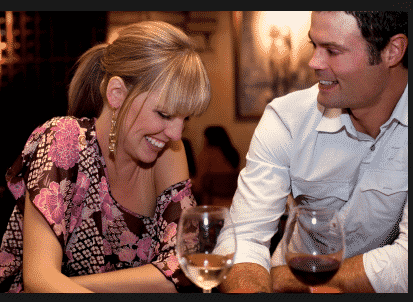 Have you ever flirted with a girl and it was just FILLED with awkward silences, weird looks and went absolutely nowhere?

What's worse is that it left you discouraged, insecure and scared to try your luck with the next girl?

It was just as awkward for her as it was for you.

You're probably sitting there thinking – “There's no way in hell”.

But before you say that, let me take you into the mind of a pretty decent looking girl at a bar on a Friday night.

Let's call our pretty hot, all around awesome girl Emily:

It's Friday night and Emily just got “persuaded” to go out to one of her favorite bars by a group of her friends.

She didn't really feel like going out but she decided to shut her friends up, throw on that sexy little dress she's been wanting to wear all week and head to the bar.

On the way there, she's mentally preparing herself to get hit on ALL night.

She's single and looking but unfortunately for her, every guy that hits on her just seems… weird.

Ugh, she tries not to think of it.

The cab pulls up in front of the bar and the music is blaring out onto the street. Her friends are waiting for her at the door.

Endorphins hit her and suddenly she forgets all about getting hit on by creepy dudes.

She gets to the bar and orders her favorite drink, an “Orgasm”.

She braces herself for what's coming next as she sees somebody nervously stumbling over to her at the bar out of the corner of her eye.

He stammers something out to her, but she pretends not to hear him over the booming of the music playing.

Please leave, please – she thinks to herself.

He apparently mustered up some courage because the next time he spoke over to her, he overcompensated and almost popped her eardrum.

“H-h-hey, what are you drinking?” he said. He looked and sounded so nervous, he gave off the impression that he was going to throw up.

“Hi, it's an Orgasm!” she said laughing a bit at the ridiculousness what she just said.

She was trying to be polite and at the same time give the guy an opening to be the cool, charming guy she was secretly hoping to meet tonight.

She was about to be disappointed.

“Oh is that what you came here for tonight?” he shouted over to her.

Now this could have been seen as cocky or funny but the fact that his unwavering awkward stare didn't break or that he didn't seem able to blink while he stood there saying it… made it absolutely creepy to her.

She gave him a half-smile, rolled her eyes and turned her back to him, allowing him to disappear forever.

Right back to the moment where our favorite hot girl Emily gets back to the bar and orders her naughty drink.

She sees a guy approaching out of the corner of her eye and she braces herself.

This time is different.

He walks right up to her and confidently introduces himself.

“Hi, I'm Robert. What's your name?” he extends his hand out, waiting for hers.

“Hey, Emily.” she reaches out for his hand.

“This is my first time here, what should I have?” he smiles at her and looks at her directly in her eyes as he points over to the bar.

His body language is so relaxed and grounded.

She can feel her cheeks start to tingle.

This guy is sexy…

“An Orgasm, definitely!” Emily says as she lifts her glass.

“2 minutes in and you're already hitting on me, jeez,” he says to her as he laughs a bit.

Emily lights up and starts cracking up.

Do you see the difference between Robert and Mr. Creep?

Robert had confidence, wit, and charm.

He let Emily chase him, implying that SHE was hitting on him.

That is the way you open a woman.

While Robert was clear in his intentions, he wasn't over the top.

He let his body language and facial expressions deliver the fact that he was not a creep and that he was socially “okay”.

Whenever you're about to approach a girl, you should always ask yourself…

P.S. Pay attention: the difference between Robert and Mr. Creep has nothing to do with looks, money, or any of the things most guys think they need… it's all in the BEHAVIOR… and behavior is something you can LEARN and get better at.

But beyond that, there's ONE thing (hint: it's a skill) that truly determines your success or failure in attracting the girl of your dreams.

Can you guess what it is? Comment in the comments sections below and let me know what you THINK it is!

I'll reveal the answer on my blog tomorrow. I bet it's not what you think it is!